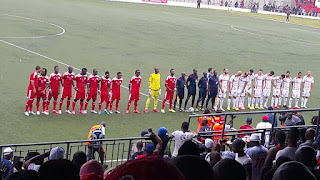 Liberia took on Tunisia today in a make or break 2017 Africa Cup of Nations qualifier at the Antoinette Tubman Stadium (ATS).  Liberia pulled off a 1-0 victory over Tunisia.
Twenty-six players were trained under the watchful eyes of coach James Salinsa Debbah and his technical staff that includes deputy coach Kelvin Sebwe, trainer Joe Armstrong Nagbe, under-23 head coach Thomas Kojo and goalkeeper coach Lucretius Togba.
It was a historic occasion for Liberia, winning on the day that the country hosted its first international football match since the lifting of Ebola ban.

Francis Forkey Doe lifted the nation spirit when he scored a goal the last  11 minutes of the game.  The result gave Liberia their first points in Group A.   Togo lead the standings after their victory in Djibouti, the team who are rock bottom without a point.