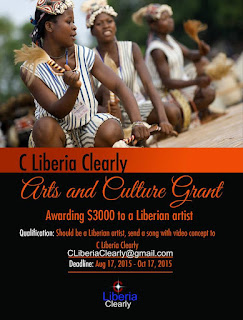 C Liberia Clearly Arts and Culture Grant was established on August 17, 2015 to encouraged Liberians to promote Liberian arts and culture and encouraged creativity.  The timeline for entry was from August 17, 2015 to October 31, 2015.  The requirement was very plain and simple, you had to be a Liberian artist, submit an original song with a video concept for the song.  Nine artists entered contest but only six qualified.  Four of the artists were disqualified because a video concept was not submitted with their songs.  One of the four artists disqualified is the renowned Hipco artist, Tru Storry.
The six qualified contestants are:
Musulyn Sweetz Myers submitted Sweetz Bitter Acapella
Dash Coleman submitted  Love You
Mercy FearlessLioness submitted Love Me
Trigg submitted Hood Forever 2
Dahai submitted She Say She Wants It
Naweh Diggs submitted We Are One
These artists submitted six great songs, unfortunately, only one winner.  We had five honest judges to pick the very best out of the six songs and they expressed that it was a difficult task, but their judgement was fairly based on instrumentality, vocal, complexity and creativity.  The five judges are:
GySgt John Wollie (United States Marine Corps)
Angela A. Washington (RN)
Forte Othniel D (Author)
Honorable Dan Toby (Liberian Ambassador to Cameroon)
Max the Mixer (Radio Personality)

The winner of C Liberia Clearly $3000 Arts and Culture Grant is Dash Coleman for his song Love You and creative video concept.