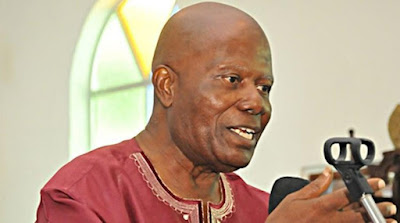 On New Year's day, Dr. Togba-Nah Tipoteh wrote a powerful message to the people of Liberia. Check it out below:

Some people are saying that there is nothing good about the New Year 2022 because nearly all of the people of Liberia are suffering in the misery of the poverty pandemic coupled with the corona pandemic.

But let it be said to these people that Ngala (Our Creator in the Kpelle language) does not give us a burden that we can not bear. This New Year Message is directed at raising awareness to motivate people to bear the burden of the suffering by doing the right thing. So, we are grateful to Ngala for giving us yet another chance to do the right thing.

There is a Call for us Liberians to move in the right direction because 80 per cent of the people of Liberia have concluded that Liberia is headed in the wrong direction (Afrobarometer, 2020).

This situation of poverty leads to violence. including coups d'etat and civil wars, as witnessed in Burkina Faso, La Cote d'Ivoire, The Gambia, Mali. Guinea, not forgetting here in Liberia.

The prevention of violence becomes the main course of action to be taken to place Liberia in the right direction. This is precisely why this New Year Message is directed at raising awareness to prevent violence.

Let us recall that the Civil War in Liberia. which began in 1989 and ended in 2003, took the lives of nearly 300,000 people, 10 percent of the population at the time, damaged billions of dollars of infrastructure, and left the Liberian economy unrecovered to its pre-war level. In the face of this dismal situation, there is talk about moving the national budget to the USD1 billion level, as corruption rolls on.

The government and its international partners are talking about progress and predict a boost in government revenue to facilitate the billion dollars move. In the absence of any systemic approach to eliminate corruption, the increase in revenue means the increase in corruption rather than development as pointed out by billboards around the Country.

When we observe that people are taking action to move the National Election Commission (NEC) of Liberia from its present UNFAIR position to a FAIR position in obedience to the Constitution of Liberia, then we can say that Liberia is moving in the right direction.

Only when NEC operates in a FAIR position for good persons to be elected into public offices will there be good actions taken to place Liberia in the right direction.

Through the persistent and consistent raising of awareness to bring change in the right direction, some progress can be observed.

For example, nearly all of the National Legislators in the 52nd and 53rd National Legislatures who wanted to be re-elected were not re-elected. This trend is highly likely to continue with Legislators in the 54th Legislature as well as with candidates who seek election to the 55th Legislature. To bring this change, violent action is not an option because the people of Liberia are focused on sustaining their mandate that calls for PEACE rather than WAR. The only option, which is the correct option, is non-violent action following the Rule of Law by raising awareness to motivate people to elect good leaders.

Mr. Korkoya was serving as Chairperson of NEC in violation of the Constitution of Liberia, as he is a citizen of the United States of America (USA). Up to now, after more than two years, SCL says that it is not prepared to "rule" on the Case. Not a single National religious leader. civil society leader. political leader, business leader or government leader has given support to the Case against NEC via Mr, Korkoya!!!

WE THANK NGALA FOR GIVING US YET ANOTHER CHANCE IN THIS NEW YEAR 2022 TO DO THE RIGHT THING AND PLACE LIBERIA IN THE RIGHT DIRECTION.