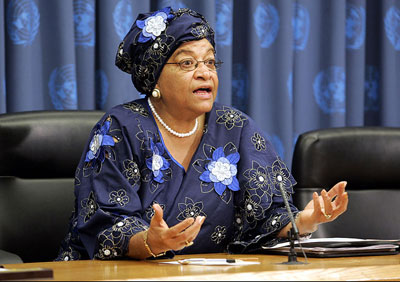 During my remarks on Saturday, at our Independence Day Celebration, I announced that we now face a National Emergency as a result of the deadly Ebola menace. I also announced the establishment of a National Task Force which I would chair along with the Minister of Internal Affairs in his role as Chairman of the National Disaster Relief... Commission. The Task Force will give support to the Technical Team headed jointly by the Minister of Health and Social Welfare and the Country Representative of the World Health Organization.

The first meeting of the Task Force was held on Sunday, July 27. The meeting was attended by the key members of the Technical Team, Ministers and Government Officials, media, political leaders, the security sector, and concerned citizens.

The meeting was briefed by the Technical Team on the severity of the disease which has intensified in seven counties – Lofa, Montserrado, Bong, Nimba, Bomi Grand Gedeh and Margibi and was advised that daily monitoring and briefing sessions at the Ministry of Health and Social Welfare for the public will continue.

No doubt, the Ebola virus is a national health problem. And as we have also begun to see, it attacks our way of life, with serious economic and social consequences. As such, we are compelled to bring the totality of our national resolve to fight this scourge.

In light of the need to address this as a national problem which could undermine the economic and social fabric of our nation the following decisions were taken:

All borders of Liberia will be closed with the exception of major entry points including the Roberts International Airport, James Spriggs Payne Airport, Foya Crossing, Bo Waterside Crossing, Ganta Crossing. At these entry points, preventive and testing centers will be established, and stringent preventive measures to be announced will be scrupulously adhered to;

A new travel policy by the Liberia Airport Authority covering inspection and testing of all outgoing and incoming passengers will be strictly observed;

Restrictions on public gatherings such as solidarity marches, demonstrations, promotional advertisement are to be restricted;

Government vehicles will be commandeered, as appropriate, to provide needed logistics support to the health delivery system;

All Government facilities and public places are to install and provide public access for washing of hands and other sensitization services;

Media sensitization programs to be formulated by the Ministry of Information, Culture and Tourism;

Standing Orders have been given to the Security Forces, including the Armed Forces of Liberia, to give support to the Technical Team and the Task Force in enforcing these regulations;

On report from the Technical Team, communities that are seriously affected will be quarantined and travels in and out of such communities restricted. Support will be provided to those directly affected by the quarantine restrictions;

Similar Task Force Structures are being established at the county level;

Citizens outreach teams are being established to support the works of the Technical Team and the Task Force;

The Task Force appeals to the public to cooperate by refraining from harming or rejecting health workers and citizens’ representatives who are only trying to save lives and protect citizens.

The next meeting of the Task Force will take place on Tuesday, July 30 at 12:00 noon at the C. Cecil Dennis Auditorium of the Ministry of Foreign Affairs