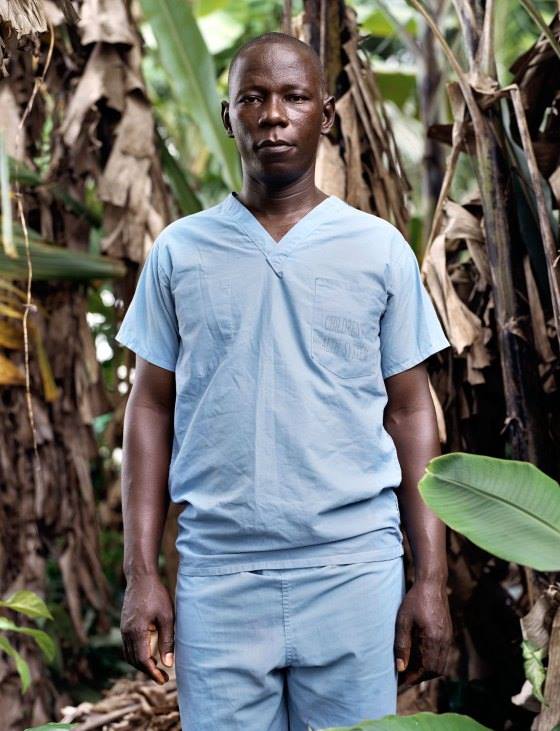 I am the supervisor on the Honorable Saa Joseph District No. 13 Ambulance. I go out in person. You are there to regulate the movement of the ambulance and sometimes supervise the cases that would come on board the ambulance....
The first time I had to pick up an Ebola patient, you don’t want to hear it. I was very afraid. Before then we had gone through a training with the Ministry of Health, so we knew how to wear the PPEs [personal protective equipment]. Though the PPEs were on me, the fear was still there. Approaching the patient, I saw this patient lying in a pool of vomit and feces. Wow, it was something to see. I was very, very afraid.
Sometimes we carry up to 50, 60 patients a day, depending on the number of calls we have to receive. Because we have only got two ambulances with the government, so remember the Ebola is tracking everywhere in the neighborhood, everywhere in the country, everywhere in the capital city. You are driving one patient, and you are getting calls to pick up another at the same time. Sometimes 10 patients in the car at the same time.

I actually got sick trying to help a family, a family of eight. I first took the mother, the sister and the son—the first three—[to] an ETU [Ebola treatment unit]. After a week or so they died. After two, three days, I received this phone call. This time it was the father calling me. Because I knew the home I drove the ambulance. When I got there, it was the grandmother, the father and the two sons. They all were down. They were dehydrated.
They were weak. I put them on the ambulance. There was only a little child [left] that did not have Ebola [symptoms]. If I take him to the ambulance, when he was still strong, he would’ve been tested negative. So I have to wait that he come down with either fever, a headache or diarrhea [before I could take him].

But before leaving that day I told the [neighbors], I said, this little child has been living with these people in this house. There is a likelihood that he might come down. But please, whenever he don’t have strength, when he come down with fever, call me and I’ll come and pick him up.
So that afternoon, I received this call. When I knew that it was from that house, and I had taken seven persons and they all had died, and that little child was the only one there at the time. So I hurried over there. When I got there, he was lying in a pool of vomit. Very helpless. And once you are losing a lot of fluid from diarrhea, you become very weak and dehydrated. He couldn’t move.

So I hurried to put on my [protective suit] and went in for him because I didn’t want him to lose his life this time around. I ran hurriedly and picked him up. So I had him face up. I moved him toward the ambulance, and he regurgitated straight on me. But I didn’t take into consideration that something that happened, that vomit or something had seeped through, and I would have been [infected]. I wanted [to save] his life.

So I got him on the ambulance and hurried to the treatment unit. I had my full [protective gear] on. But maybe there was an opening somewhere that I didn’t know. I never had the feeling that this vomit have slipped through somewhere. Because I was only looking at him.

Two days later I started coming down with fever. The first day the headache was very severe. I was restless, so I said I have to go and do my test. Now the next thing came to my mind was that if I told a lot of people that I am going to do my test, there would be more fear and it wouldn’t be good. So I only told my mom and my brother and my boss. And my own very ambulance drove me off. The very ambulance that carried my patients drove me off. So when I went there [MSF Clinic], I was tested and it was positive.

I was attended to well. I was cared for. And thank God that I went there on time—I was fine. Other people, other folks say their treatment was not fine, but my treatment was fine. Everyone cared for me—the nurses, the doctors—because remember now I was always interacting with them, bringing in Ebola patients, and they were very friendly.

When I got there I was so loved by everybody. People were always talking to me. The people in [protective gear] were always talking to me: “Foday, how are you doing? You are going to be O.K.” Those words drove me on. And my family, my boss and everybody cared for me, so all those words gave me encouragement.
I have never experienced anything like I experienced with Ebola. Ebola pain, it don’t stop. When they started giving the medication, I found my pain doubled. I had a general body pain, joint aches pain, headache, stomach cramps. The pain became exceptional. For the headache, it was like someone taking a 100-lb. hammer and just pounding on your head. And at that moment you don’t want to hear any noise in your ears. You don’t want anybody calling your name. Someone calling your name is going to aggravate you. My phone rings—if it rings I shove it under my mattress because I don’t want nobody talking to me. Until after three days, four days, did the pain subside. And up till now as I am sitting talking to you I still have a slight headache. Not severe—it’s very mild—but I still have it.

I was trying to save a little boy, a little child. And he survived. He survived. He is alive and well and doing great. He is somewhere in Kakata. And that was my prayer. That was my wish. Even if I had died of Ebola, I still have family, right? But that little boy lost his family. His mother, his brother, his sister. Wiping away his entire family. But I kept him alive. So all my efforts did not go in vain. I survived, and he survived.

I saw him [in the treatment unit]. I got there two days before he was discharged. He was there. And I stayed there for two weeks. He was my son there. He was always around me. I was very happy to see him. I was very happy. Maybe he gave me the strength to live because all my efforts [to save him] did not go in vain with that child.

I don’t regret picking him up, because I prayed for his life, I wanted his life. And today he has his life. So I think I achieved something: his life. At least that can be a representation of his family. So there is one member of the family who survived.

I am going to go back in full swing. I am not going to be afraid. I am going to walk in to fight Ebola with all of my might. I would have died. A lot of people die. But in there I was treated, and cured, and automatically that is the work of God, and I have built immunity to it, so that is a gift. And I wish to share with a lot of people my blood. I want to give my blood so a lot of people can be saved. I am willing to do that.
I am going to get on that ambulance. I am going to every nook and cranny of the capital city, pick up whatsoever Ebola patient and take them to the [treatment unit], give them words of hope, of encouragement. I can do a lot. And try to educate people about Ebola. That Ebola is not a death sentence.