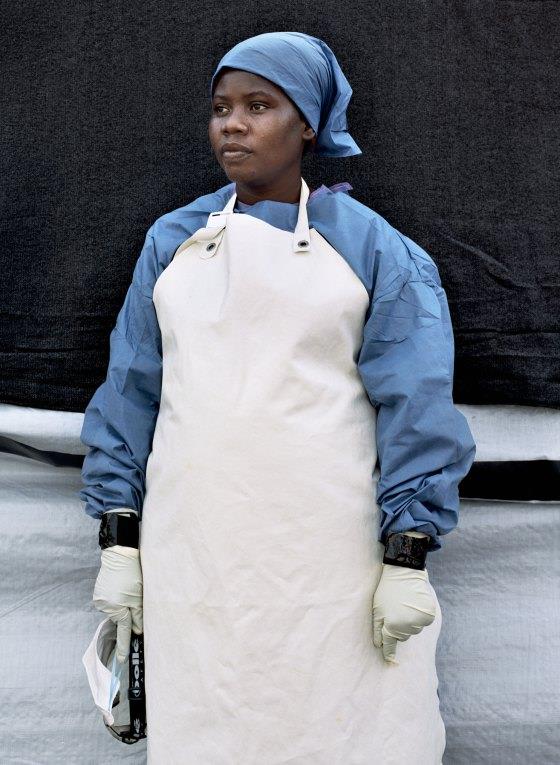 Meet Time Magazine Person of the Year, Salome Karwah, 26
Nurse’s assistant at the Doctors Without Borders/Médecins Sans Frontières (MSF) clinic in Monrovia and an Ebola survivor

We heard that there was a new sickness coming by the name of Ebola and it is in Guinea. And I was afraid, because Guinea is not far from Liberia. And most of our businesspeople go to Guinea to buy goods and bring them to... Liberia. So I knew it was a possibility that they could bring it to our country.

I was working for our family clinic in the Smell No Taste area [near the airport, in Margibi County, an hour and a half from Monrovia by car]. I was a nurse. Both my mother and father, plus my elder sister and I, [were] medical personnel.

We got Ebola through a crisis that happened near our town. This lady, 26 years of age, she was pregnant, from [the city of] Kakata. And then she got sick. And then she died.

A lady from my community went to the funeral. And there she contracted the disease. My father’s brother, my uncle, was her pastor for the church. She got sick, and he went to help her as her pastor. He contracted it from her, and then she died. After a week, my uncle
got sick.

[My uncle] drove to our house for my father to see what really was going on. That is when my father contracted it. And then he brought it into our house, with my mother taking care of him. He was a diabetes patient. When he got sick, I used to give him his medication, his injection, insulin. And then I contracted it.

My sister was pregnant six months. Helping my dad, she got it too. And then my mother did, because both of them used to sleep on the same bed. And then my niece who was 6 years of age. And then my fiancé. So everyone was infected.

He brought my mother, my sister and me on the 21st, the day our father died. My mother died the 24th of August.

When I got sick, I was breast-feeding my 10-month-old baby. My brother took her blood to do her tests. She was negative. So my fiancé was taking care of her, because I was in the ETU. Since she was negative, they couldn’t bring her to me.

The 29th, [my fiancé] got sick. He left the baby with our next-door neighbor and came for the tests, and was positive.
Due to the death of my parents, I went out of my mind for about one week. I was going mad. I was very, very much distressed. I just felt that everything was over. But after a week, with encouragement from the nurses and a counselor—they helped me a lot—I become stable. I was taking my medication, I was eating. And always they were coming to encourage me.

To have Ebola is very, very horrible. It deals directly with the brain. It makes you—you can’t remember anything. The pain is very much severe. If you don’t have strong resistance, you can’t stand it. The headache of Ebola is extraordinary. It hurts like they are busting your head with an ax. And it gives you severe body pains, like you don’t even want to move your body from here to there.
The girl that [my fiancé] left my baby with, she used to bring her to the ETU, and I saw her every two days. She would stand across the fence and I would sing for my baby. I made a song for her on the day she was born. I used to sing it before she went to sleep. It goes like this: “Go to sleep, baby, go to sleep. Go to sleep, baby.” She knows it very well. So I sang this song when they brought her to the fence. She would be laughing, playing, and then they would carry her back.

I go in [to the treatment wards] not saying I am a survivor. I ask [the patients], “Where do you live? What is your contact number?” And I tell them, “Just because you are here doesn’t mean that this is the end of your life. You have another life to live. I was a patient here. I managed to survive. So if I can survive—I’m not different from you—you can survive too.” And the person will say, “Ah, you are a survivor? How did you manage to survive?” And I tell them.

When I see my patients survive, it brings a great joy to me, because at least my efforts never went in vain.