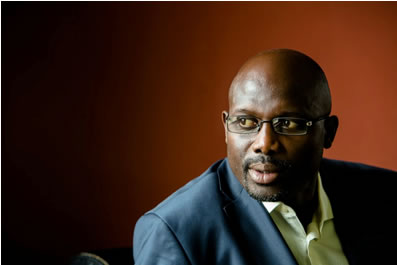 Forbes has named Weah one of Africa's Ten Most Powerful Men. Weah is listed along with Zimbabwe’s richest man, Strive Masiyiwa who is quietly connecting the continent, laying underground fiber optics cable through his company, Liquid Telecom while fighting against the scourge of the Ebola outbreak to Tidjane Thiam of Ivory Coast who dominated global business news last week with his announcement that he would be heading up one of the world’s largest and oldest banks, Credit Suisse in Geneva, Switzerland.

Also included is Uganda’s Victor Ochen, youngest African nominee for the prestigious 2015 Nobel Peace Prize for his advocacy for victims of war and the youth. According to Forbes, these African men have been and continue to be at the forefront of taking the affairs of the continent into their own hands and transforming it into the change they want to see in it.

“Against the backdrop of an Ebola outbreak ravishing the country, former football star George Weah won a landslide victory in one of Liberia‘s most high-profile senate race elections. Weah obtained 78% of the vote for the highly contested Montserrado county seat, which included the capital city of the country, Monrovia. The former footballer-turned politician beat Robert Sirleaf, the son of President Ellen Johnson Sirleaf, who took nearly 11% of the vote”, Forbes stated.

The international Magazine stated in its ranking that Weah’s senate win is widely viewed as foundational for a second presidential run in 2017. Weah is popular with the Liberian youth and is regarded as one of the greatest African players of all time; he is the only African to be named FIFA world player of the year. Forbes recognition of Weah will be seen by his supporters as a boost to their candidate quest to become President of Liberia. For many Liberians before voting, they look at candidates to see the level of international connections which play a role in their decision.