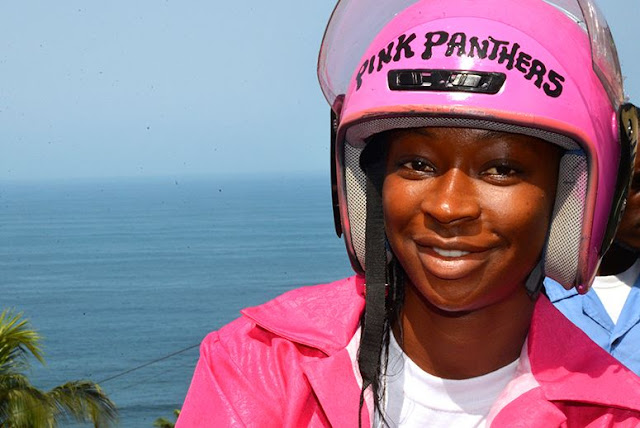 Clad in bright pink jackets and helmets, the entrepreneurial group of female motorbike taxi drivers—dubbed the Pink Panthers All-Girls Motorcycle Club—is challenging the cultural norm in Liberia and doing a so-called “man’s job”, with gusto.
Thanks to support from the U.N. Development Programme and Angie Brooks International Centre, a Liberian NGO for women’s rights, the girls have gone from being a loosely banded novelty of female riders to a branded entity with official gear. Now, the two agencies are working together to help Liberia’s first female fleet of motorcycle taxis get financing for their bikes and protection from harassment.
The women picked the name Pink Panthers because pink referred to femininity and panther to strength in an effort to reflect their ability to work in a male-dominant environment. 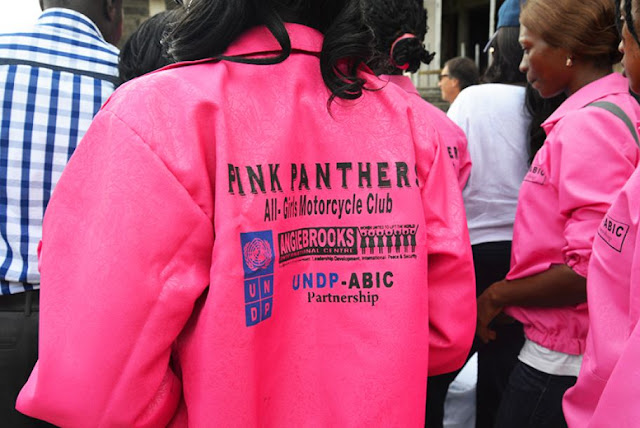 It’s a risky gig, acknowledges Dearest Coleman, the 30-year-old founder of the group. During her six years working as a motorbike driver, she’s been robbed and threatened by male passengers. The worst situation she found herself in was when a passenger arranged for a heist in a remote area during a trip to Kakata, about 40 miles east of the capital city of Monrovia. She agreed to take him because the long journey paid well but he had friends waiting alongside the road armed with knives. They stole the only bike she owned.
Now, she rents a bike, like many of the other members of the Pink Panthers. Each week, they pay roughly $24 to rent from a local bike owner. Bikes for purchase cost $1,200 to $1,400—far too expensive to buy in one lump purchase, especially given that drivers earn an average of $7 per day.
The U.N. came across the women riders during last year’s Ebola outbreak, when the organisation rounded up motorcycle taxi drivers for lessons on how to protect themselves from the virus. During this training session, staff members decided to help formalise the group, which was only casually organised at that point.They joined forces with Angie Brooks International Centre and provided the women with pink jackets and helmets. 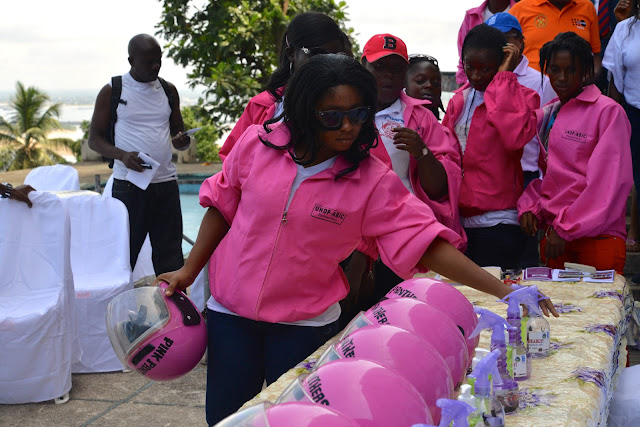 Currently, the Pink Panthers consists of about 15 riders in their twenties or thirties. It’s rare to see a woman motorcycle taxi driver in Liberia as there are only about 40 female drivers in the country. Getting more women to adopt the profession is a challenge because of the low pay and safety risks.
In February, Helen Clark, the head of the UNDP, met with the group and also encouraged the deputy police director in Monrovia—who’s promised to offer support and protection for the group—to keep his word and take action on behalf of the women.
“It’s a matter of equality—women deal with extra risks, therefore they deserve extra protection from police,” she said to the women during her visit. “We need to make sure you’re getting the help you need to make an income, as well as to be able to get around town without being harassed.” 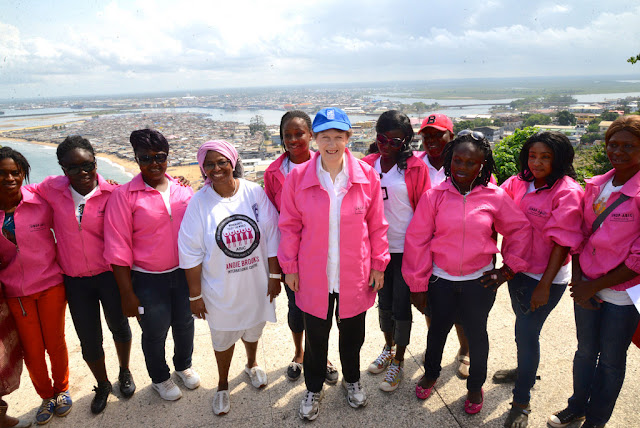 And help is needed. Since banding together, the group has faced backlash and unfriendly comments. Even women are reluctant to accept rides with the Pink Panthers, believing they might not be as competent on the roads or as savvy drivers as their male counterparts. But they have a spotless record—to date, the women haven’t had a single accident.
Some family members are unsupportive, resentful that the women are gaining public attention and have become associated with the UNDP. Several bike owners have also seized the bikes being rented to members of the Pink Panthers.
“It will take a major change in social attitude for women to be treated better,” says Coleman.
She also points to another problem: no standard fare so the price of each journey is negotiated. Male passengers sometimes refuse to pay once they arrive at their destination, and the women often don’t feel comfortable demanding payment because the confrontation could turn violent.

“There is little we can do,” Coleman says.
UNDP has planned a special training session for the women on defensive driving and preventing physical attacks. It’s also tackling the financing of the bikes, which would free the Pink Panthers from having to rely on local bike owners. Both UNDP and Angie Brooks International Centre are also trying to set up a long-term interest loan program for the women.
Despite the challenges, Coleman encourages more young women to join the Pink Panthers and hopes that once the group gets big enough, they can form a union and collect membership dues. The money would be put aside as an informal insurance system to cover expenses when incidents occur—for instance, if someone needs to go to the hospital, or gear gets stolen—and allow all the women to support and stand up for one another.
“In numbers, there’s power”, she says.


If YOU agree, please sign our Poverty is Sexist petition and let world leaders know we want them to put girls and women at the heart of the development agenda!