Liberia Withdraws from Amputee Football World Cup - Find Out Why 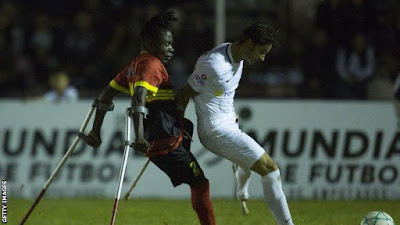 ﻿
Angola have won the 2018 Amputee Football World Cup in Mexico, beating Turkey 5-4 in a penalty shoot-out in Sunday's final.
The match ended 0-0 after normal time, and the deadlock could not be broken in extra-time.
The deciding shoot-out proved just as tense with both teams scoring from their first four penalties.
At 4-4, Angola's goalkeeper, Jesus, made a crucial save to deny Turkey.
The African team, who finished as runners-up at the last World Cup, sealed their championship victory thanks to a winning spot-kick from Henio Guilerme.


Nigeria and Kenya also represented Africa at the Amputee Football World Cup.
Kenya made it through to the knock-out phase for the first time, eventually losing to Russia in the last sixteen.
Nigeria's Special Eagles failed to make the second round, after two defeats and one victory in the group phase.
Liberia and Ghana, who also qualified to play in Mexico, withdrew before the start of the tournament after Liberia reportedly failed to secure their visas on time, and Ghana faced financial difficulties. ﻿