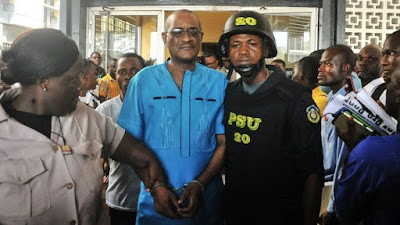 MONROVIA, Liberia (AP) - Liberian police on Monday formally charged the 61-year-old son of the country's former president, Ellen Johnson Sirleaf, in connection with the unlawful overprinting of local currency worth millions of U.S. dollars. Separately, police also opened an investigation into the death of a central bank official.

According to the charge sheet shared with The Associated Press by police, Charles Sirleaf and others, including former Central Bank governor Milton Weeks, face a multitude of charges, including economic sabotage, the misuse of public money and criminal conspiracy.
The men, arrested Thursday, have been taken to Monrovia Central Prison pending their court appearance.
Lawyers for the accused did not publicly comment about the charges.
Their arrests came after a government report and a separate U.S.-commissioned report pointed to the mishandling of billions of Liberian dollars in local banknotes.
According to the U.S.-backed report, Liberia's central bank unlawfully ordered three times the number of bank notes it had been authorized to print, money that it can't wholly account for.
Sirleaf was a deputy governor at the country's central bank during the period when the bank notes were unlawfully ordered. Sirleaf has denied any wrongdoing.
The U.S. Embassy in Monrovia commissioned the probe by the U.S.-based firm Kroll Associates following reports in August that about $100 million worth of Liberian bank notes had disappeared - an amount equal to nearly 5 percent of the West African country's GDP.
Kroll said its investigation found no evidence of a large shipment of cash going missing as had been reported by local media. Instead, the new bank notes are said to have arrived from a Swedish company but the central bank then failed to properly track what was done with them. The report said most of the bank notes are believed to have been put into circulation without authorities removing and destroying the old bills they were designed to replace.
It said officials at the central bank had not cooperated in explaining who approved the injection of new bank notes without removing the old ones.
In a separate development, Liberian newspaper FrontPage Africa on Monday reported on the death of the Central Bank of Liberia's deputy director of micro-finance Matthew J. Innis.
Innis is said to have left his house Saturday morning before being involved in an alleged hit-and-run on Sunday.
Police spokesman Moses Carter warned people against drawing early conclusions into the incident, saying they were investigating the "circumstances surrounding" the accident to know "whether it was intentional or unintentional."