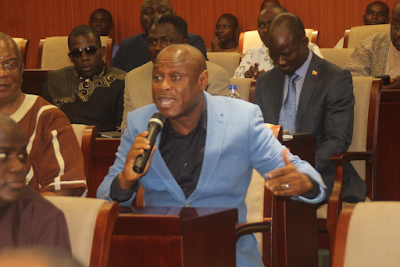 The lawmaker died in a tragic motor accident early Monday morning near the Tower Hill Community off the Robertsfield Highway.

The late Mr. Lawrence was on his way from the celebration of his 50th birthday at the home of his wife, Senator Nyonblee Karnga-Lawrence (Liberty Party, Grand Bassa County) in Buchanan.
Eyewitnesses told FrontPage Africa that truck carrying timber lost control of its breaks and rolled into Rep. Lawrence’s jeep, killing him and a lady who was in the front passenger seat of his car. Three others who were in the back seat are said to be responding to treatment.
It took the police and rescuers several hours to remove his body from the car. Inspector General of Police Patrick Sudue earlier told FrontPageAfrica, “The body is stuck in the car and it is nearly impossible to take him out of the car. As I speak to you, there is no way to get the body out of the car.”
Mr. Lawrence, a geologist has been a member of the lower House since 2012. Besides the Land, Natural Resources, Energy and Environment committee, Rep. Lawrence also served on the Investment and Concessions and Youth and Sports and the Contracts and Monopolies committees.

In recent weeks, the law, Mr. Lawrence and a number of lawmakers have been in a major row with House Speaker Bhofal Chambers whom they accused of ‘unruly’ behavior.
In one of the major drama on the floor of the lower House, Rep. Lawrence was heard calling plenary’s adopted agenda a “trash”, prompting Speaker Chambers to order the Sergeant-at-arms, Brigadier General Martin Johnson to escort the Montserrado County’s lawmaker out of session for what he (Speaker Chambers) termed as his disturbance and unruly behavior.
The drama began following the reading of the agenda by the Chief Clerk of the House of Representatives, Mildred Sayon, and a motion for adoption was filed by Rep. Samuel Kogar (Nimba District #5).
Several lawmakers including Reps. Lawrence and Yekeh Kolubah (Montserrado District #10) raised their hands to amend the motion (either to add, modify or subtract) for subsequent adoption by plenary.
Rep. Lawrence wrote several communications to House Speaker including a plead for the City Major of Monrovia, Jefferson Koijee to be invited and explained why Monrovia was overwhelmed by dirt and fifths. His communication, however, did not appear on the floor.
Source: FrontPage Africa.