A tribute in commemoration of our father the late President Dr. Samuel Kanyon Doe 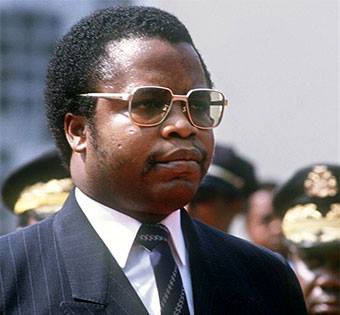 By Samuel K. Doe Jr.
I can’t believe that it has been 24 years since our young innocent lives changed on that fateful day of September 9th 1990 and will never be the same. Growing up as children of the late president, like most other families in Liberia, we were thought from the ...onset the significance of education and the respect of elders. Reward was synonymous with hard work from our early years. On numerous occasions, we were denied funds to go out on excursions with classmate and friends, funds to needlessly go shopping for toys or sometimes, as harsh as may seem, money to even celebrate birthdays if we underperformed academically in school, other times, any news of us disrespecting our nannies, teachers or elder for that matter would be frowned upon and seriously dealt with. (African Style)

Most people would think why would this be the case? After all, our father was the president of the Republic of Liberia; our father’s strict ways of discipline may appear unorthodox and strange, but as we would find out later in life; it was for the best. Back then, one would ask, what was really the problem? It was somewhat inconceivable to suggest that money was a factor or maybe, the only other semi rational reason was if money wasn't a factor then it must be that our father didn't love us like other father’s loved their children, or was he was just a mean and stingy man that cared less about his children happiness and his only focused was the running of the country?

This question beckoned with us for ages and was never fully answered and we didn't wholeheartedly appreciate why we were never spoiled or showered with money like other first family children in Africa or around the world. We as children failed to appreciate the core ethics and values that were instilled in us when we were growing up. Not until we grew up into adulthood that we now realized our father was teaching us a fundamental value of life which suggest that hard work, dedication and respect rears reward; his love was indeed a priceless blessings in disguise.

During the short, but precious time we spent with our father, he thought us very important lesson in life that we strive to uphold, not only did he teach us it but he practiced what he preached throughout his legendary life.
Our father thought us to dream. He would always tell us to think big, he implemented his dreams by the pursuit of education. As a child from a very poor background living in Tuzon, Grand Gedeh County, he walked 13 miles to his school and back just to acquire education. This passion to Dream and think bigger than his current circumstances lead him to Monrovia were he enlisted to join the army.
Even as an office clerk, he still believed that he could do more to improve his condition and that of those around him. He enrolled in night school to attain more knowledge. He was promoted to the rank of Master Sergeant in the Armed Forces of the Republic of Liberia in 1978 and subsequently, the coupé of 1980 propelled him into the conscious of Liberia, Africa and the world at large. As the highest ranking officer amongst his peers, he was awarded the enormous task to lead Liberia into a new and prosperous era, thus becoming the youngest Commander in Chief at the tender age of 30. Our father’s rise to prominence didn't mysteriously manifest into reality, but by divine destiny and the ability to persevere under uncompromising situations.

Our father was and is the original Child that would be great! His Dreams and determination didn't stop there, as Commander in Chief then President of the Republic of Liberia, his urge and hunger for education was still second to none. How many presidents have you seen enrolled in their local university after they have ascended to the highest office in the land? His Vision of a better Liberia, a Liberia that each and everyone would be proud of has transcended in us, not just his biological children but we as Liberians who dearly feel the need to unconditional love the soil that has been the home of our ancestors? Never will we forget those days the shambolic prospects of an indigenous Liberian attempt to acquiring knowledge and access to higher education in Monrovia prior to 1980 without compromising there integrity was dire and virtually impossible. We can proudly boast that those days are now over because of the courage and vision of our father.
Liberians can now not only dream of achieving higher education in reaching one’s God given potential without the need to legally change his/her names to Jones, Banks or Cooper etc, to gain a government scholarship or even enrolled into education without the fear of castigation or rejection. History can bare us witness that this was due to the fact that the one party system ceased to exist. We as Liberians regardless of which county we hail from can now enjoy this Dream solely because of the (PRC) and one man’s Dream to make tangible changes in the lives of millions of Liberians. Before 1980, It was virtually impossible to have a Foreign Minister by the name of Ngafuan, thoughtless to say a Finance Minister called Konneh. All these milestone changes in our history have happened because Dr. Samuel Kanyon Doe had a Dream to make changes in the Lives of his people he dearly loved.

As we commemorate the life of this great man that we proudly called are father, we also commemorate those Gallant men that departed with him. They shall never be forgotten. We shall forever be proud of you and your achievements father. You have made us strong as a people in Liberia, a reason to speak boldly and majestically gloat in the face of adversities. You have given us the zeal to be brave and resilient when need be. You have made us men amongst men. You have thought us that peace is always the first option amongst our brothers. Even though you have departed this world, you have sowed your seeds on this earth and those seeds have germinated into fine young Men and Women.
We have learned from the best. We vowed that your name will be the greatest in the history of our beloved, cherished and only country, Liberia.

We also vowed that your legacy will live on and that the truth must be told. Dad, you have thought and shown us that you stood for what you believed in, and by that your thoughts, vision and principles are synonymous with ours. We are of the conviction that when you close your eyes for the last time, you did so without any regrets because you have fought a good fight, champion a good cause. Rest assured father that you have left no stones unturned. You have created future
leaders, Lawyers, Project Managers, Doctors, Communication Specialists, Motivational Speakers, Entrepreneurs, Soldiers, Scientist, Politicians and of course the backbone of the entire clan, your beloved and most trusted confident, Mrs. Nancy B. Doe to oversee and realize your unfinished dreams, not to mentioned the brilliant, honorable and courageous people of our blessed county, Grand Gedeh that loves and cherish you and all meaningful Liberians that believed in you and your ideology of a prosperous and developed Nation that we all can be proud of today. We salute you sir. In the cause of the People, your vision must be realized!

P.s, we ask you to pleases tell God to have mercy on our people, they are seriously suffering and dying on an unprecedented scale in Liberia due to this Ebola epidemic.