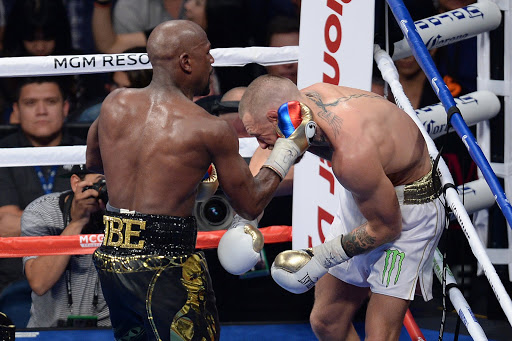 Floyd Mayweather reportedly tried to place a $400,000 bet on himself, prior to his fight with Conor McGregor, which he won on a TKO knockout in the 10th round in Las Vegas.

Per David Purdum at ESPN, Mayweather "went into the sportsbook" ahead of the fight "with cash and plans to bet on his fight against UFC star Conor McGregor."

The 40-year-old reportedly wanted to bet $400,000 at odds of -200 that the fight would end under 9.5 rounds but was denied due to "concerns over the legality of a fighter betting on anything other than a straight win."

The report also states Mayweather also tried "to bet on himself to win by knockout" but was unsuccessful, although it is not known if he subsequently placed the bet elsewhere.

Per Purdum, had the 40-year-old placed either bet, either on a knockout or at under 9.5, it would have paid out with the fight stopped with one minute and five seconds of the 10th round remaining.

Prior to the match, Mayweather appeared on Jimmy Kimmel's show and said he was allowed to bet on himself on the fight and that he planned to place a wager:

Mayweather also said he would repay Kimmel if the television host were to bet on him and he lost the fight to McGregor, per Matt Bonesteel at the Washington Post.

It remains to be seen whether Mayweather did actually manage to bet on himself; however, he was certainly financially rewarded for the fight, as noted by ESPN's Arash Markazi:

However, Saturday's fight looks to have been the 40-year-old's last big payday, with Mayweather announcing after his win that it was definitely his last fight, per Paul Cockerton at the Mirror.