Mayweather vs. McGregor: Highlights From Every Round 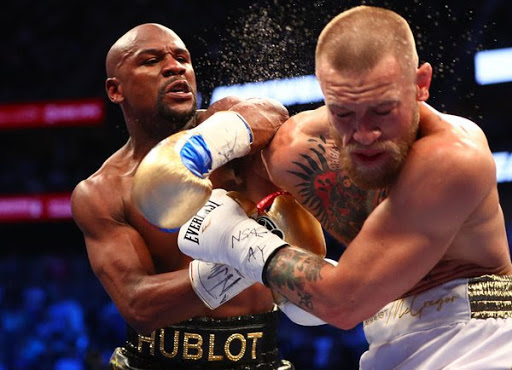 By JOHN ELIGON and VICTOR MATHER

Floyd Mayweather Jr., the face of boxing for more than a decade, punctuated a stellar yet controversial career with a technical knockout over U.F.C. champ and first-time boxer Conor McGregor on Saturday night.

In the 10th round of a surprisingly competitive fight, Mayweather backed McGregor onto the ropes with a series of rights and lefts. McGregor’s face was completely bloodied. He was about to fall through the ropes, and the referee stepped in to stop the fight with 1:55 remaining in the round.

“I gave the fans what they wanted to see,” Mayweather said after the fight. “I told them that I owed them for the Pacquiao fight. I must come straight ahead and give them a show.”

The victory improved Mayweather’s record to 50-0, and allowed the typically defensive fighter to say farewell in thrilling fashion in what he said was his last fight. It also proved right the naysayers who said that this fight was nothing more than a glorified, money-making exhibition.

“This was my last fight tonight ladies and gentlemen, for sure,” Mayweather said.

Mayweather declared the fight was not going to go the distance, and he delivered on that promise. Things went just the way most pundits said they would. McGregor had no way of connecting cleanly with Mayweather. He landed a few touch punches but nothing solid the entire fight. And given that U.F.C. fights are much shorter than boxing matches, McGregor’s stamina was in question. And he certainly tired in the late rounds as Mayweather made easy work of him. 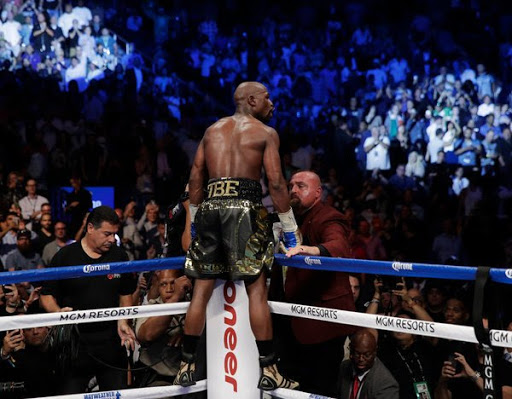 Although McGregor is one of the biggest stars in mixed martial arts, he had not boxed since he was a teenager, and had no professional boxing matches under his belt.

The fight was fashioned on the strength of two bombastic personalities with huge fan bases, making for a ripe promotional draw. It was expected to pull more than half a billion dollars in revenue. The pull of the money was so strong that Mayweather ended his two-year retirement to step into the ring with McGregor. To many, the fight was more exhibition than authentic.

1st round: McGregor comes out strong

McGregor comes out pushing Mayweather back onto the ropes. Mayweather seems content with seeing what McGregor has in terms of punching ability. McGregor is flicking his right jab out, trying to measure up a left hand but not landing anything seriously.

McGregor seems to have done something no one thought he would. He may have won that round.

Mather: Before the round referee Robert Byrd emphasized the bout would be “by boxing rules.” And there was no surprise kicking or takedowns by McGregor. And not a lot of punching from Mayweather, who was content to use his legendary defensive skills to frustrate McGregor. McGregor dropped his arms at one point, a tactic he has used in the U.F.C., as if to say, “Just try to hit me.” Mayweather did not take the bait. 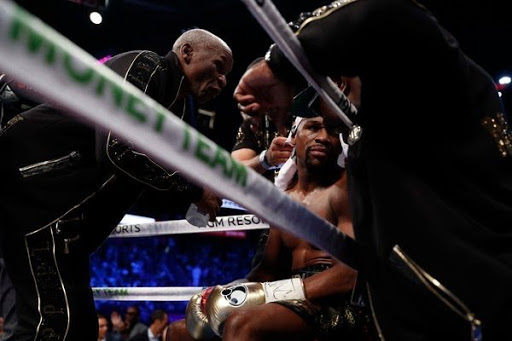 Referee warns McGregor for hitting Mayweather in the back of the head. McGregor is bouncing up and down in a somewhat awkward fashion for boxing. Mayweather seems to still be trying to figure him out.

McGregor doing a nice job of keeping Mayweather away, though he is not landing anything solid. But every time he even swipes his hands close to Mayweather’s, a big cheer goes up from the very pro-McGregor crowd.

We are starting to see Mayweather’s plan emerging. He is looking to hit McGregor with some lead right hands.

Mather: The fans who had stood for round 1, perhaps expecting fireworks, settled back into their seats for round 2. Between rounds McGregor smiling broadly. 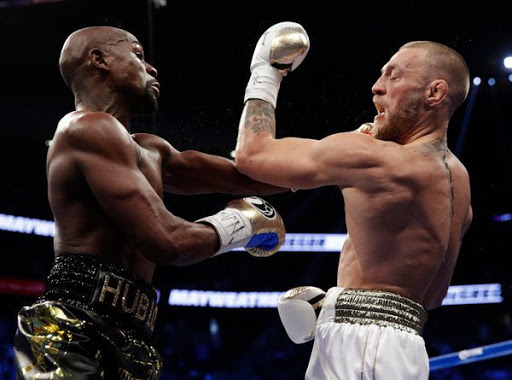 When McGregor gets in close, he seems to be hammer-fisting Mayweather on top of Mayweather’s head when they clench. The referee has warned McGregor about it several times.

Mayweather is taking his time figuring out how to get to McGregor. He has not shown much offensive aggression or landed too solidly with anything so far. McGregor has won the rounds so far, if nothing else because he is the aggressor. But let’s see if he can keep up the stamina.

Mather: McGregor could actually be ahead on the scorecards at this point. But there is a real sense that Mayweather is biding his time and hasn’t fired his big guns yet.

4th: Mayweather makes up some ground

At the start of round 4, Mayweather backs onto the ropes and covers up, allowing McGregor to take shots, none of which landed cleanly. I wonder if Mayweather is trying to rope-a-dope McGregor a little bit, make him tire himself out by throwing a lot of punches early in the fight.

Mayweather ducked under a McGregor jab and landed a pretty solid right hand.

Mayweather is getting some things going. He slipped a left hand from McGregor and fired off a right hand of his own. It was a close round but probably went to Mayweather. Mayweather also landed a couple of good body blows.

McGregor seems to be swiping and tapping at Mayweather rather than throwing solid punches. It might be one sign of his inexperience in the boxing ring, as he is not used to throwing punches in close range the way that boxers do.

Late in the round, Mayweather started to talk down to McGregor. He hit him with a solid overhand right and then came back with a left. McGregor is breathing a little heavier, and the two fighters have had some real tussles when they have locked up. Mayweather looks a bit frustrated at what seems to be some wrestling moves by McGregor.

Mather: Mayweather is doing less defending and more lashing out. Could he be waiting for McGregor to tire to unleash his full arsenal? And McGregor is starting to look tired.

Mather: Every McGregor punch that lands, or looks like it lands, gets a roar from the crowd. Judges have been known to be influenced by crowd reactions. 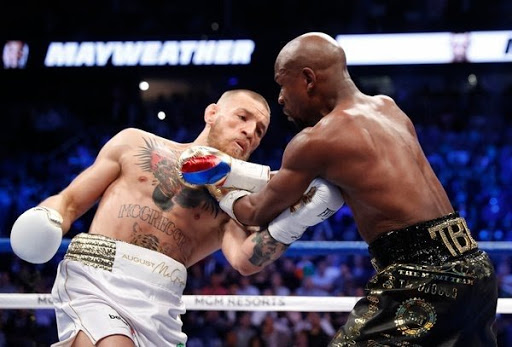 With Mayweather’s back turned, McGregor was unleashing on him and the referee let it go on for a little longer than he probably should have. After appearing perturbed, Mayweather started going forward and unloading on McGregor, landing solid left-right combinations that got the arena to its feet. McGregor appears very tired and is not throwing back.

Fans have started with chants of “Conor,” but that appears to be doing little to uplift their fighter in a meaningful way. Although the fight is still pretty scrappy, Mayweather seems to be settling in.

Mather: Mayweather stung McGregor there several times, but eventually reverted to his defensive style. And another hands-behind-the-back display of bravado by McGregor as the round ends. 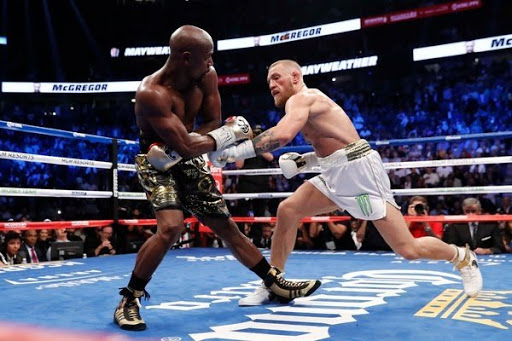 7th: Mayweather’s speed gets to McGregor

Even though McGregor is the bigger fighter, Mayweather certainly does not seem to be worried about his punching power. He is going forward, with his hands up, walking right through McGregor. In one moment, McGregor slid around Mayweather but was met with a right hook. Then Mayweather came back with a quick jab that hit McGregor before he could respond. Even though Mayweather is 40, the speed definitely is still there.

Mather: Championship fights in the U.F.C. have 25 minutes of fighting time. McGregor is up to 21 here and might have to go 15 more. His fatigue level is the most important factor right now. 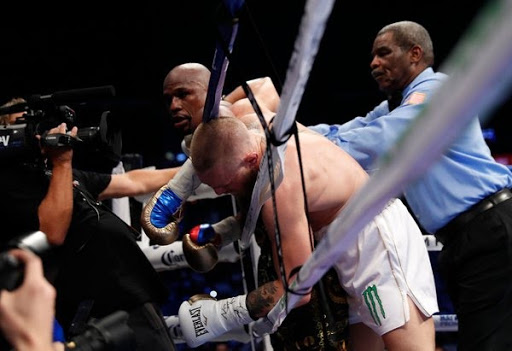 When they are clenching, Mayweather is positioning his body in a way that McGregor can only hit the back of his head. For most boxers, they would not throw that punch. But McGregor is not most boxers. He is hitting the back of Mayweather’s head, and the referee seems reluctant to do anything about it. Mayweather seems a little bit frustrated by that, but it’s not stopping him from landing some peppery right hands. Mayweather seems to be taking control.

Mather: McGregor is falling behind in this fight, but is still gamely slugging it out. This is far from the ridiculous mismatch some predicted.

Things got off to a chippy start. McGregor came out and landed a stiff right hand and then he hit Mayweather on the belt line. Mayweather appeared to be hurt by it, but the referee did not call a low blow. When the referee got in between them and Mayweather approached, McGregor flicked him with a right hand.

Late in the round, Mayweather came storming back with a series of right hands, that had McGregor leaning on the ropes with his mouth open.

10th: A flurry from Mayweather, and the ref stops the fight

This fight’s over. Mayweather backed McGregor onto the ropes with a series of rights and lefts. McGregor’s face was completely bloodied. He was about to fall through the ropes when the referee stepped in to stop the fight with 1:55 remaining in the round.