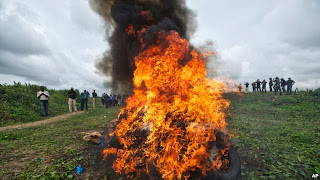 This is not one of my usual topics. I normally focus on arts and culture but I just couldn’t resist sharing this piece of information with you.


Ok, you got me, it wasn’t the physical cash that was burned to ashes but goodness gracious, 4 million is a lot of dollars to be burned in the form of marijuana.  Liberia’s Drug Enforcement Agency destroyed nearly 300 kilograms of marijuana on Friday evening in a suburb of Monrovia, the nation's capital.
According to officials, the drugs were smuggled into the country by Perry Dolo, a member of President Ellen Johnson Sirleaf’s motorcade staff.  He used one of the government vehicles to transport the marijuana from Sierra Leone.  How sad? Thank goodness, the president did the right thing by burning the drugs. Of course, she didn't physically burned it herself but it looks good on her leadership.
Perry Dolo was arrested shortly after crossing the border.

Liberia’s Information Minister, Lewis Brown, said the burning was to show that there will be no tolerance for drug-related crimes.
"You can be in the center of a convoy, but if you break the law, there will be no hiding place for you," he said. "That convoy will not hide you. We will arrest you, we will properly investigate you, and, we will prosecute you if found guilty. This crackdown will continue. It’s a nationwide crackdown."

Hope the government come around to doing the same when it comes to corruption.  Of course, don’t burn the money found embezzled by government officials, please invest it in the development of the nation.