Benjamin Sanvee, a former Youth Advisor to ex-President Charles Taylor, will be running for the Senator position for monserrado county, Liberia, West Africa, in 2014.  Like Liberian folks would say, “I wanted to know where his head is.”  I emailed Mr. Sanvee some questions, which he responded to, through email.  Below are questions to Mr. Sanvee and his response. 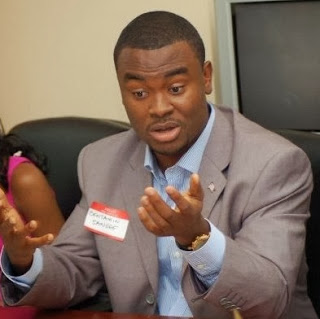 Me: What does the word, “grassroots” means to you?

Mr. Sanvee: The word grassroots to me simply means a movement that is generates from the bottom to the top  and is owned by the people. They are the driving force and what or whom ever emerges from said movement is accountable to the people.
Me: Do you consider yourself a grass rooter?

Mr.Sanvee:  I consider myself a Patriotic Liberian that fights to uplift and empower my people.

Me:  Out of the Senator’s main issues of focus, which would you like to work on and why?

Mr. Sanvee:  The three cardinal responsibilities and functions of a lawmaker are : Representation, Lawmaking and Oversight. I believe that all three are important and I will focus on all three. Lawmaking is essential because the laws you enact contributes to either the upward mobility of the nation or it’s  downward spiral. Representation is key because in order to make sound and effective laws you need the input and support of your constituents. Oversight is paramount because you serve as a watchdog over the peoples’ money and help guide the implementation of the policies and laws by the executive.
Me:  Why are you interested in this position?

Mr. Sanvee:  My interest is purely based on my desire to continue contributing to the development of my country. I’ve served and I’m contributing in many other ways, but  I’ve  come to realize that some of the changes and reforms we need can only be effected from within. The people of Montserrado deserves and Senator that will fight for them and the issues for their upliftment. The Liberian Senate needs a voice that represent the dreams and aspirations of the next generation of Liberian leaders. So I’m offering my self as an alternative to what we currently have.
Me:  How would you deal with an angry constituent?

Mr. Sanvee:  In most cases anger generates from disagreement and dissatisfaction. So I’ve learned that listening and learning especially in disagreement is vital. So I will always listen and learn to find a common ground.

Me:  What is your stand on dual citizenship?

Mr. Sanvee:  I personally support dual citizenship. But I believe it should be placed in a referendum for the people to decide. We live in a democracy and that’s the best method to resolve contentious issues.

Me:  It is not unlikely to see Senators around the world aiming for a higher position in government.  Could you clarify this question asked by you during your last interview? ”why anyone would want to reduce the Chambers of the Senate to a class room for learners, who crave a higher post in another branch of government?”

Mr. Sanvee:  I simply meant that no one should seek office with the singular reason to use that office as a springboard to the next office. That response was in reference to an assertion made by Rep. Edwin Snowe that we should elect Amb. Weah as senator because, it will help us gauge his ability to lead. The people of Montserrado County deserve a full time senator that is ready to lead from day one.

Me:  What is your stand on public education?

Mr.  Sanvee:  I believe we should invest more in public education as a nation. A vast majority of our citizens only have access to public education due to the high level of poverty in our country. I am a fighter for the improvement of our educational sector and intend to continue that fight if  I get elected.  We also need to focus more on vocational and technical education as our nation need builders in every sector. This is key because we need implementers of all the visions and agendas we are developing for the future. I also have a saying: “I don’t care f we bankrupt our nation educating our people … because an educated nation will get itself out of bankruptcy”.

Me:  What is your stand on corruption?

Mr. Sanvee:  I believe corruption is a menace to any society especially ours. We need to continue strengthening the GAC and LACC. We also need an Anti-corruption court to fast track corruption cases and start punishing people found engaging in this act.

Me:  What are your professional views of George Weah?

I believe Amb. Weah is a patriot that loves his country dearly like we all do. He continue to represent our nation well and is a role model for a lot of young people in our county. However, I just have fundamental differences with him when it comes to the political leadership of our country and county. I believe he has an important role to play in the future of Liberia, but just not as Senator of Montserado County or President of Liberia. But that will be up to the people to decide come October 2014.

Me:  As an advocate for Liberian Entertainment, I would like to know how the government can assist in its growth and development?

Mr. Sanvee:  I believe we need to strengthen our copyright laws and provide more support for our local artists in all sectors of entertainment. We have so much talent in Liberia that could be tapped into to help heal some of our wounds. So I intend to also be an advocate and supporter of the entertainment industry.

Me:  What are your views on family values?

Mr. Sanvee:  I am very strong on family values. I come from a very close knit family and believes that we need to reclaim that lost component of our society. I’m a husband and a father. That’s my two most important jobs. My sanity and peace comes from my wife, Clare, who is the rock of our household. She’s my biggest fan and also my strongest critic. She keeps me grounded and reminds me that all of the hype and adoration won’t matter if the people are not the focus point of my agenda. Our son Benjy is my world and he’s such an amazing kid. And we are also expecting our second child in February. So I’m blessed and highly favored.