Fatu Gayflor: A Message to My Fans! 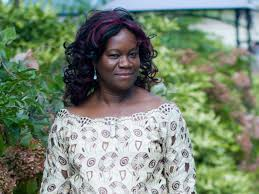 The golden voice of Liberia, Princess Fatu Gayflor has been out of the Limelight for a while. Yesterday, during a phone conversation with C Liberia Clearly, the Princess talked about some projects she has been working on and asked that we delivered a special message to her fans.

"I have been focusing my time on The Liberian Women's Chorus for Change.  The Liberian Women’s Chorus for Change inspires awareness and dialogue about domestic violence and other concerns of the local Liberian community through traditional song and stories. Throughout the spring and summer, we will be performing for Philadelphia’s Liberians at various sites, and networking with local social service agencies and activists to connect people with resources so as to foster individual and community strength and dignity.  We have a two year contract with the Philadelphia Folklore Project, which will be over in October.  After the project is over, I will focus on my music.  I want to do something this year.  I might drop a new single or just work on some music videos.  Thanks to the fans for being patient with me.  I will be back soon with more great songs." Fatu Gayflor