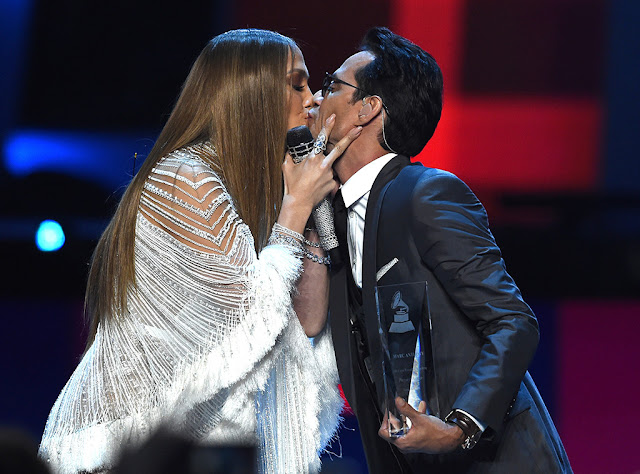 Jennifer Lopez and Marc Anthony shocked the 2016 Latin Grammy Awards audience on Thursday when they took the stage together and debuted their single "Olvídame y Pega la Vuelta," which they followed with a sweet smooch!
Yes, J.Lo took it back to her roots by revisiting Spanish-language music with the help of none other than her superstar ex-husband who is being honored on the big night as The Latin Recording Academy's Person of the Year.
The two totally rocked the stage together, causing the crowd to go absolutely wild while continuously shouting, "Beso!"

Their new single is a remake of the famous Argentinian duo, Pimpinela's song. Interestingly enough, the message is about a lover who is asking her ex to forget about her—about her name, her face, her home—as she has learned to live without him, and she is moving on.
After their performance, J.Lo presented her ex-husband with the Person of the Year Award, plopping a big kiss right on his lips, sending the crowd into a roar of cheers.

The moment comes five years after ending their seven-year marriage. Recently, Anthony's Magnus Media and Sony Music Latin announced in October that they entered a new business deal with Lopez. The companies will be developing and producing Lopez's upcoming Spanish-language album, slated for release in this month.
Anthony is serving as the collection's executive producer and his company is to "provide consulting services to Lopez in the areas of marketing, content development, and touring specifically for the Hispanic market," the companies told E! News.
"I am so excited and really looking forward to this new musical journey and to celebrate my Latin roots with Marc Anthony and the Sony/Magnus family," Lopez, 47, said in a statement.
Aside from the magical duo performance, Anthony was honored by the Latin Recording Academy as Person of the Year.
The night was filled with performances from Prince Royce, Gente de Zona, Gilberto Santa Rosa, Carlos Vives and many more. Not to mention an emotional speech from Ricky Martin who handed the 48-year-old singer his award and noted that their paths first crossed back in 1987 when Anthony was a producer for Menudo.