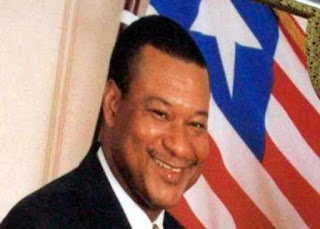 In Liberia, a former associate of former President Charles Taylor has declared his candidacy for the country’s 2017 presidential election. Businessman Benoni Urey, who served as head of the country’s lucrative Bureau of Maritime Affairs during the Taylor presidency, said he wants to be president to improve the living condition of all Liberians.
He refused to criticize President Ellen Johnson Sirleaf’s government, which some say has not delivered what it promised the country more than 10 years ago. Rather, Urey said his presidency will unite Liberians while providing the basic essentials of life, including water, shelter, and electricity. He also promised to fight nepotism and corruption.
“I’m certainly desirous of being president because I want to improve the living condition of my people. I want my people to be placed among nations that are developing. For too long, our people have been in darkness. It’s about time that they move into an era of renaissance so they can see the light, where they can experience some of the basic essentials that are necessary for life in the world today,” he said.
Urey, whose All Liberian Party (ALP) was certified by the National Elections Commission on August 7, joins two others who have already declared their candidacies: President Sirleaf’s Vice President Joseph Boakai and two-time presidential contender Charles Brumskine of the opposition Liberty Party.
Urey described as “comical” accusations that he has no experience to run a government. He said he has more political experience and education than all the candidates who are running for the presidency.
“Of all the people that will be running for the presidency, I have more political experience than them; I have more education than them; I have more education than them, and I have more business experience and leadership experience,” Urey said.
Some of Urey’s critics describe him as the embodiment of all of former President Taylor’s alleged crimes against the Liberian people. But Urey is unapologetic, saying he worked for the Liberian government and not Taylor. Besides, he said, he’s not the only one who knew Taylor. He points to President Sirleaf and many in her cabinet.
“Our present president was a colleague of Mr. Taylor; more than 30 percent of her cabinet were ministers under Taylor. I don’t understand why it would be a problem for me. I want you to be aware of one thing, I did not work for Charles Taylor; I worked for the government of Liberia. Charles Taylor government was a legitimately elected government and I worked for the government of Liberia,” he said.
Urey said it is about time Liberians stop putting down those who served their country in the Taylor government. After all, he pointed out, Taylor is serving almost a life sentence in Europe, and he does not understand why people would continue to tie capable leaders of Liberia to Taylor. Urey said Liberia is desirous of a change.
Urey is a successful businessman. He’s chair of LoneStar Communications Corporation, perhaps Liberia’s largest cell phone company. He has also reportedly invested in residential housing, hotels, car rental companies, radio and television stations and a newspaper.
Urey is also a farmer, producing poultry and other farm products, and is estimated to be worth millions.
He said he got most of his wealth after leaving the government. He said he is the largest single Liberian employer and will continue to employ more Liberians.
“I am everywhere in Liberia. Even Money Changers, I am sponsoring them; Pen-Pen Boys (motorcycle taxi drivers), I am sponsoring them. I have a hand in everything in Liberia. It is not because I need the money, but what is most satisfying to me is that I am giving a Liberian a chance to live because I also was in a position where I wanted somebody to help me start off life. I know what it is not to have money to pay tuition; I know what it is to take your father to the hospital and don’t have money to pay hospital bill; I know what it is not to have a meal on your table because I’m a product of all those difficulties,” Urey said.
He said he’s open to partnering with other political parties if need be to choose a single candidate.
“As I told you, no one group of people owns Liberia. Liberia is owned by every tribe in this country, every religion in this country. I, Benoni Urey, wants you to join me in this movement to move our country forward. We have been talking to every political party,” he said.
Urey was one of several former associates of Taylor placed under United Nations sanctions and a travel ban. But late last year, a U.N. panel of experts recommended he be removed from the travel and assets freeze ban. The panel also said it did not find any reason to suggest that Urey was involved in activities that would be used to destabilize Liberia and West Africa as a whole
But Urey said he’s still under U.S. Treasury Department sanctions. He said he has written the U.S. government to remove the ban since it was based on U.N. sanctions which have now been lifted. He said he’s hopeful that at the appropriate time the United States will remove its sanctions on him.
“I forwarded an appeal to them that there is no merit to this based on the fact the Treasury list was created as a result of a U.N.-imposed sanction on us and the U.N. has lifted these sanction and other international organizations – the EU has lifted their sanctions on me; Great Britain has lifted theirs; Canada has lifted theirs; France has lifted theirs. So we hope that the United States will do that soon,” Urey said.