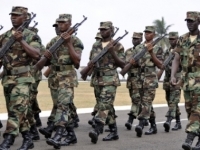 The Government of the People’s Republic of China has donated US$3 million worth of military equipment to the Armed Forces of Liberia (AFL).
Speaking at the official turning over ceremony of the equipment at the Barclay Training Center (BTC) in Monroviaon Wednesday, Chinese Ambassador ZHANG Yue said the donation is evidence of China’s sincere support to Liberia’s peace-keeping and social stability efforts in the course of the U.N. Mission in Liberia (UNMIL) drawdown.
Ambassador Zhang said the donation of 20 heavy duty trucks, two motor road graders, 10,000 sets of military uniforms and 40 military tents is the second batch of substantive military assistance from China to Liberia during his tour of duty in the country.
“We take Liberia’s development priorities as our assistance priorities which are aimed at bringing tangible benefits to the Liberian people as the development of the overall bilateral relations, exchanges and cooperation between both countries has deepened steadily,” he pointed out.
The Chinese envoy recounted that since 2004, China’s Ministry of Defense, through mutual military exchanges and cooperation has provided Liberia’s Ministry of National Defense nearly US$15 million in military assistance as well as 217 training slots, disclosing that 23 AFL officers and soldiers are to travel to China for training.
He noted that China appreciates the achievements that have been made by the Liberian Government in the development of the national economy and infrastructure development for the benefit of the people.
Zhang said he is confident that with the strong leadership and determination of President Ellen Johnson Sirleaf, China-Liberia relations and cooperation will always keep abreast, seize opportunities, tackle challenges, make new strides and embrace a brighter future.