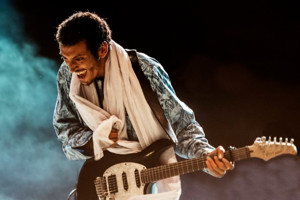 The Apollo Theater in partnership with World Music Institute presents what has become an annual highlight, AFRICA NOW!. The celebrated event returns to the historic Apollo Theater (253 West 125th Street) on Saturday, March 26, at 8:00 p.m. for its fourth year spotlighting emerging and established artists of today's African music scene. Sahr Ngaujah (actor in Fela!) is the evening's host.
Drawing upon roots in Niger, Zimbabwe, Sudan, and Ghana for inspiration, each of this year's artists brings a unique sound, experience and energy to the stage, integrating African identity with a cosmopolitan spirit and urban vigor.
From World Music Institute's Artistic Director Par Neiburger: "The range of contemporary music in today's Africa is something to behold. Africa Now! at The Apollo has grown over the past four years into the definitive event showcasing the vital emerging artists in modern African music and Afropolitan culture. This year includes Africa's newest guitar hero Bombino, the vibrant rhythms of Mokoomba, the retro-pop of Alsarah & The Nubatones, and the neo-soul/afrobeat sounds of Jojo Abot. It will be a thrill to see these artists in NYC, on the iconic Apollo stage, all in one special evening."

Tickets at $25 - $50 are available at www.worldmusicinstitute.org, the Apollo Theater Box Office: (212) 531-5305, 253 West 125th Street, and Ticketmaster: 1-800-745-3000, www.ticketmaster.com.
About Bombino - Born and raised in Niger, in the northern city of Agadez, Bombino is a member of the Tuareg Ifoghas tribe, a nomadic people descended from the Berbers of North Africa. His dazzling live performance and virtuosity on the guitar have led notable music critics to compare him to Jimi Hendrix, Carlos Santana, Neil Young, and Jerry Garcia. WMI's Par Neiburger declares Bombino "the next star of desert blues, à la Tinariwen." His 2013 album Nomad debuted at #1 on the Billboard World Music album chart and earned rave reviews including from BBC World Service, which called it "utterly, utterly fantastic." His fifth album Azel-a collaboration with Dirty Projector producer Dave Longstreth-will be released April 1, 2016.
Read Complete Bio
About Mokoomba (Zimbabwe) - Exuberant youthful energy bursting with natural talent and contagious rhythm, the six young musicians who make up Mokoomba are Zimbabwe's next generation of hope. Musically distinct, Mokoomba combines traditional and modern instruments with a rich blend of rhythms, creating a vibrant sound consisting of not only traditional Tonga music but embracing the diverse cultures of southern Africa. Mokoomba made a big impression with their debut tour of North America in 2014, and they are thrilled to return to the U.S. and Canada in March/April 2016 with brand new material in advance of their upcoming album, Luyando.
Read Complete Bio
About Alsarah & The Nubatones (Global/Local Artist*, Sudan/NYC) - Alsarah is a Sudanese-born singer, songwriter and ethnomusicologist. Born in the capital city of Khartoum, she relocated to Yemen, and later moved to the United States in 1994, following the outbreak of civil war. Through a collective love for Nubian 'songs of return' and an evolving conversation around shared migration experiences, Alsarah, drummer Rami el Aasser, Armenian-American oud player Haig Manoukian, and French-born Togo-raised bass player Mawuena Kodjovi, formed Alsarah & The Nubatones with a sound that has grown into what they have dubbed 'East African retro-pop.'
Read Complete Bio
About Jojo Abot (Global/Local Artist*, Ghana/NYC) - Jojo Abot, an emerging Ghanaian singer-songwriter, is poised to capture the ears of discerning listeners worldwide with her experimental blend of electronica, afrobeat, jazz, neo-soul, house and reggae. Dividing her time between Accra, Copenhagen and New York City, Jojo's music is a cultural and sonic fusion driven by her sultry voice, enchanting vulnerability and thought-provoking lyrics.
Read Complete Bio
About Sahr Ngaujah (Host, Africa Now 2016) - Sahr Ngaujah originated the title role in Fela! Off-Broadway, Broadway and in the West End. Ngaujah earned an Obie & Theater World Award and was nominated for an Olivier, Tony, Grammy, Drama Desk, Lortel and Drama League awards for his performance. TV credits include: "The Good Wife," "Taxi-22" (pilot), "The Blacklist," and "Last Resort." Film credits include: Freeheld, Kenshow at the Bedfellow, Blood Done Sign My Name, The Signal, Stomp the Yard, Finding Fela, and the upcoming Money Monster, directed by Jodie Foster. Director: Conversations With Ice, Seven Sins. Masters of Theatre: DasArts - Netherlands. Music: Sahr + Ricardo aKUsTIc, Chop & Quench, 2016 album appearances include "Drum for your life" by Pop It! "Action" by Directors, "Are you ready for this"(EP part3) by D-Felic.
About WMI's Global/Local Initiative - This season, World Music Institute launched Global/Local, a new element of WMI programs dedicated to celebrating and supporting the rich diversity of the world music and dance artists living in and coming from the New York area. In addition to a dedicated weekend this past November at BAMcafé, which featured Awesome Tapes From Africa and Gato Loco, numerous local artists have appeared throughout the season as opening acts, giving them exposure to a much larger audience than they would normally have, and simultaneously exposing WMI's audience to genres that they might not discover on their own. Examples include the local Cape Verdean singer Fantcha (who opened for Brazilian star Ana Carolina at Town Hall 9/17) and the local Afrobeat group Underground System (who opened for Afrobeat legend Orlando Julius at Le Poisson Rouge 9/25). Ghanaian singer-songwriter Jojo Abot and Sudanese-born Alsarah are Global/Local artists performing in this year's Africa Now!.
About WMI (www.worldmusicinstitute.org) - Since 1985, World Music Institute has been the leading presenter of world music and dance in the United States. WMI is committed to presenting the finest in traditional and contemporary music and dance from around the world at attainable prices for all, with the goal to promote awareness and engagement of other cultures and to encourage cultural exchange between nations and ethnic groups. WMI collaborates with community organizations and academic institutions to foster greater understanding of the world's cultural traditions and depends on public and private funding to accomplish its mission.

Under new leadership as of 2015-16-its 30th anniversary season-World Music Institute has introduced an ambitious expansion of concert offerings that include contemporary, experimental and avant-garde presentations, as well as the traditional music that WMI has long been known and admired for. In addition, the institution is thrilled to have launched new partnerships with BAM, 92nd Street Y, Storm King Art Center, Le Poisson Rouge, and Drom-while continuing partnerships with The Metropolitan Museum of Art, Town Hall, Symphony Space, and the Apollo Theater (the annual Africa Now festival).

Some of the new and already widely-hailed series that World Music Institute created in the 2015-2016 season are the Lusophone Festival, Counterpoint series, Masters of Cuban Music, Masters of African Music, the return of Flamenco dance, and a Global Local initiative that offers opportunities and exposure to emerging NY talent in international music and dance. WMI is committed to continuing its legacy of presenting the world's greatest living masters in Indian classical music as well as in Indian dance, notably with its acclaimed Dancing the Gods series.
To donate or become a member, the public can visit worldmusicinstitute.org.
About The Apollo Theater - The legendary Apollo Theater-the soul of American culture-plays a vital role in cultivating emerging talents and launching legends. Since its founding, the Apollo has served as a center of innovation and a creative catalyst for Harlem, the city of New York, and the world.

With music at its core, the Apollo's programming extends to dance, theater, performance art, spoken word initiatives, and more. This includes the October 2014 premiere and 2015 international tour of the dance celebration project James Brown: Get on the Good Foot, the annual Africa Now! Festival, Apollo Club Harlem, and the upcoming New York premiere of the opera Charlie Parker's YARDBIRD. The Apollo is a presenting organization that also produces festivals, large-scale dance and music works organized around a set of core initiatives: Apollo Music Signature Programs-Amateur Night, Salon Series, Apollo Music Café; Legacy Series- work that celebrates and extends the Apollo's legacy through a contemporary lens; Global Festivals including the Women of the World (WOW) Festival and Breakin' Convention, international and U.S.-based artist presentations focused on a specific theme; and Special Projects, multidisciplinary work with partner organizations.

Since introducing the first Amateur Night contests in 1934, the Apollo Theater has served as a testing ground for new artists working across a variety of art forms, and has ushered in the emergence of many new musical genres-including jazz, swing, bebop, R&B, gospel, blues, soul, and hip-hop. Among the countless legendary performers who launched their careers at the Apollo are Ella Fitzgerald, Sarah Vaughan, Billie Holiday, James Brown, Michael Jackson, Gladys Knight, Luther Vandross, Stevie Wonder, D'Angelo, Lauryn Hill and Machine Gun Kelly; and the Apollo's forward-looking artistic vision continues to build on this legacy.