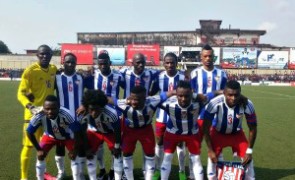 The Lone Stars of Liberia succumbed to pressure on Sunday In Monrovia against a well drilled Togo’s Sparrow Hawks team that came from two goals down to walk away with a vital away point in a nerve wrecking 2-2 draw in the the Gabon 2017 Africa Cup of Nations qualifier at the Antoinette Tubman Stadium (ATS).

The sticks were high, but, the Lone Stars needed a must win match to brighten their chances to qualify for their third Africa Nations Cup finals in 15 years. The Liberians announced their intention as early as the 8th minute when the Israeli Second tier club Hapoel Afula center back, Gizzie Ducan Dorbor latched on to a wayward cross to strike a ferocious long range effort few meters from the corner post as the ball eluded the 37 year old Togolese shot stopper Agassa Kossi of French club Reims. Dorbor became the first Liberian defender to score for the Lone Stars in 26 years. It can be recalled, the last time a defender scored for the Lone Star was on October 21, 1989 when full back, Alexander Theo, scored a blistering long range effort during  Liberia 2-0 second leg win over Guinea’s Sylli Nationale in the CEDEAO Cup at home in Monrovia.
The goal by Dorbor ignited the game as Togo began to make inroads, but tenacious defending from Dirkir Glay and Theo Dennis Weeks made life difficult for the former African footballer of the year, Emmanuel Adebayor. The Togolese played with lot of width. The pacey Standard Leige of Belgium winger Matthieu Dossevi and French club Bastia midfielder Floyd Ayite were ominous as they caused trouble for the hosts. In the 15th minute, Togo were awarded a free kick from a promising position and Ayite’s effort hit Tommy Songo’s wood work.  As the game progressed, the Lone Stars attacked in droves with Anthony Laffor, Francis Doe and Dioh Williams looking menacing, but it became visible as the Togolese began to dominate possessions.
William Jebor and Francis Doe struggled for service, as Dorbor was substituted shortly before half time for Alvin Mccornell, who plays locally for Barrack Young Controllers. Back from recess, it was the Lone Stars that got the cushion against the run of play when a lethal Francis Doe showed composure and calmness to play a quick ball to partner in crime William Jebor who scored with a spectacular header in the 54th minute to rotate the scoreline to 2-0.
The Hawks equalized in 69th minute, and added a second in the 83rd. Tonia Tisdell was introduced for Francis Doe, after the equalizer, but it was later too late as the referee blew the final whistle to end the match. This was an opportunity lost and was the first time ever the Lone Stars had surrendered a two goal lead at home in a qualifier. Liberia will meet the Carthage Eagles of Tunisia in September on the final week of the qualifiers.