In Kenya, foreigners announce party for 'whites', invite black ladies and warn black men not to show up 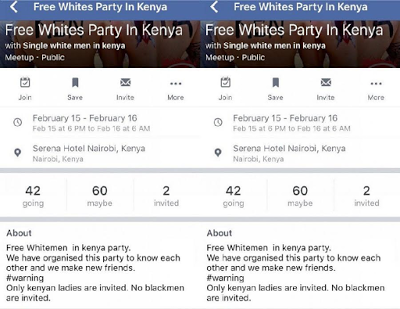 An advert about a 'Free White men Party in Kenya', scheduled to take place at the Serena Hotel on February 15 and 16 is causing an uproar on social media.
According to the advert, White men are inviting only Kenyan ladies while their black men are told not to show up at the venue.
'Free Whitemen in Kenya party.
We have organised this party to know each other and to make new friends.   Warning: Only kenyan ladies are invited. No blackmen are invited'.
Earlier Wednesday the management of Serena Hotel in Nairobi took to their Facebook page to deny that the party is scheduled to take place at their premises.

'It has come to our attention that Serena Hotels ‘s brand is being used by some people purporting to be affiliated to or claiming to host events at Nairobi Serena Hotel. These schemes are engineered to fleece Kenyans of their hard earned money. Please be informed that Nairobi Serena Hotel has no association whatsoever with such individuals/groups and would not allow such events to be held at its premises. Serena Hotels is taking the necessary action to stop this misrepresentation of its brand by unscrupulous people.'

However, the Chief executive of  Kenya Film Classification Board (KFCB), Ezekiel Mutua also revealed that a complaint about the 'White Men and Black Girls Only' party and has commenced investigation.
"Such parties that promote racism or indecent behaviour are outlawed by the board line with the Film and Stage Plays Act Cap 222 of the law of Kenya. The board is investigating reports of such illegal activities in certain affluent areas in Nairobi and Mombasa and we shall ensure the law takes its cause.' he wrote on Facebook"