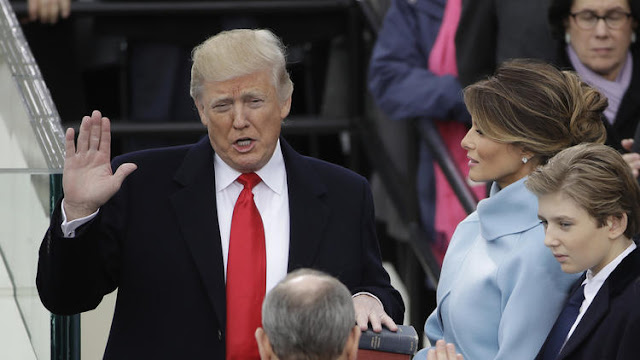 by Stephen Battaglio
The inauguration of President Trump was watched by 30.6 million television viewers on Friday, 19% below the audience of 37.8 million for President Obama’s first swearing-in ceremony in 2009.
The figure is based on preliminary data from Nielsen for inauguration coverage that aired from 10 a.m. to 6 p.m. Eastern across 12 networks. Ratings for PBS, which were not available Saturday, will add to the final total.
Ratings for inauguration ceremonies are higher in years when a new president is sworn in. Obama’s second inaugural in 2013 averaged 20.6 million viewers.
Trump’s audience total is higher than the first inaugurations for George W. Bush in 2001 (29 million), Bill Clinton in 1993 (29.7 million) and George H.W. Bush in 1989 (23.3 million).

Ronald Reagan drew the largest TV audience for an inauguration in 1981 when 41.8 million viewers watched.

Fox News — the network that 40% of Trump voters turned to first for election coverage in 2016, according to a recent survey — had the largest inauguration audience with 8.4 million viewers. NBC was second with 5.8 million, followed by ABC (4.91 million), CBS (4.56 million), CNN (2.46 million) and MSNBC (1.34 million).
During the oath of office and inaugural address between noon and 12:30 Eastern, the Fox News audience peaked at 11.76 million viewers.
The Nielsen figure does not include people who watched the inauguration through video streaming on the Web. CNN, which typically has the largest streaming audience for news events, said its online viewing peaked at 12:15 p.m. Eastern with 2.3 million concurrent streams.