How Possible 800 Liberian Police Officers Died in Line of Duty? 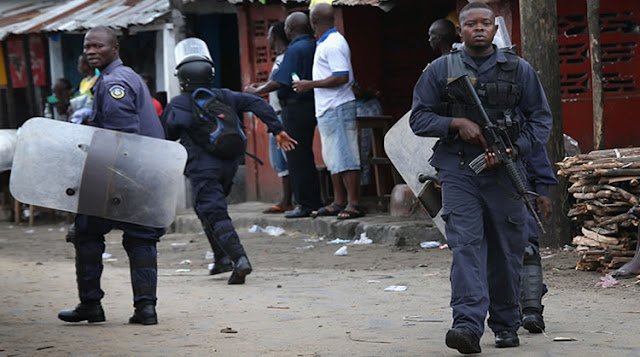 Law enforcement is not on my resume, but the leading newspaper, FrontPageAfrica carried on January 19, 2017 the following headline: "Liberia National Police Memorialize 800 Fallen Officers," obviously, the headline is bound to get your attention.
Thus, this inquiring mind about the 800 Police officers, who they were, how and when did they die since the story did these address these concerns.
I then went on to reach out to current and former Police officers and others in the law enforcement business in Liberia. Luckily, I came across a veteran of the law enforcement industry who headed both the former Special Security Services (SSS) responsible for presidential protection and later as Director of the Liberia National Police (LNP). But for the purpose of this article, he asked to conceal his identity.
With his vast considerable wealth of knowledge, experience and first hand history of the Police, my first question to him: how possible is it that 800 Police officers have died in the line of duty at any period in the history of the Liberia National Police?
Could it be that 800 officers may have died since the founding of the Police Force in Liberia? Does this number include Immigration and other agenvues? He emphatically said "very unlikrly" was his answer.
Because the FrontPageAfrica story left me and the reading public confounded by not even suggesting how the number "800" was arrived at as Police Officers who were being "memorialized" in a ceremony that was well attended by the current Police Chief Colonel Coleman, the top brass of the Police Department and Justice Minister Frederick Cherue.
But the post-war Police Department has been plagued by many problems of unprofessional conduct, the shooting deaths of civilians, the mysterious deaths of suspects while in Police custody, and the reported aiding and abetting of armed robberies by senior Police officers, just to name a few.
FPA in June 2016 ran this shocking headline: "Liberia: Senior Police Officers Provide Arms to Armed Robbers." Police officers identified by the LNP who provided material and logistical support including uniforms, guns, Police badges to arned robbers were Edwin T. Swen, CSD John Kollie and CSD Johnny Johnny Dean. Some had presidential appointments and so they could not be dismissed by former Police Chief Chris Massaquoi.
There have also been numerous incidents of Police brutality against civilians even involving the elite presidential Executive Protection Service, EPS, formerly the SSS.
All of this behavior the former SSS and LNP Director blames on the heads of those institutions as the absence of discipline.
He then took me on a historical journey of what is today the Liberia National Police that began under President William VS Tubman and his Vice President Barclay in the 1950s.
Known initially as the Monrovia City Police when a Mr. Parker was Mayor of Monrovia in the 1950s, the Police headquarters was located in a building at corner of Broad and Mechlin Street. When the name changed to the National Police Firce, Mr. Nathaniel Baker became the first Commissioner.
Mr. Baker was first with the Executive Action Bureau.
Others who headed the LNP were Director T. Konblah Thompson who died from heart attack in his car on what is now Somalia Drive, John P. Tucker and T. Boyd Nelson.
The Police Headquarters was also relocated to the firmer Coco- Cola Building on Ashmun and Buchanan Streets when it also changed name from the National Police Force to the Liberia National Police, LNP.
The current ultramodern Headquarters was built during the Presidency of Samuel Doe with Mr. Wilfred Clarke as Director of the LNP. At the dedication of the headquarters, then Justice Minister Jenkins Scott suggested to President Doe that it be named in his honor but President Doe reportedly declined.
Accordingly, President Doe suggested that the building shoud be named in honor of its present Director at the time, Wilfred Clarke, but Director Clarke too declined and he Clarke suggested its current name: Charles Alohonso Caine, a legendary "cop" but was said to have never been a Police officer but loved policing. Caine died in 1991.