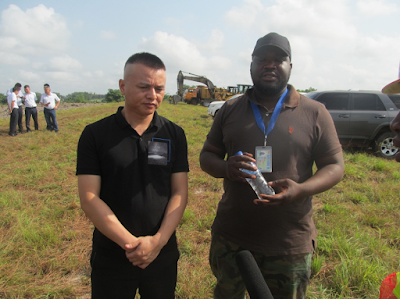 MONROVIA – On a 40-acre land space on Morris Farm, at the outskirt of Kakata, Margibi County, on Saturday, December 15, 2018, different types of ‘bush-clearing machines’ were lined up at the South-side of the low-grass field.

At different angles to the line of Caterpillars, Tractors, and Tractors were Chinese men and Liberian men and women. Many were in a common uniform—helmet (yellow—with “CICO” written at the face) and a vest (yellow and red)
Another group was composed of Chinese nationals only—in different colors of wears.
Few feet above the general body of persons a palm-sized aerial-recording plane, remote-controlled by somebody in the ‘plain cloth’ section, was roaming in circled, making continuous buzzing  sound, “fon…fon….fon…”
“We are here to break ground for the construction of a plywood factory, the first of its kind in Liberia, and for Liberia,” a Chinese man, in Black T-shirt, black shirt, and brown shoes, said to two journalists—one from State-owned ELBC; the other a freelance journalist and member of the Liberia Association of Writers (LAW) He had introduced himself as Eric Chen and the General Manager for the Company undertaking the project.
The name of the Company is Shangyou Wood Industries Development Company, a part of the Shangyou Liberia Furniture Industry Park, into Timber (wood) processing, established in Liberia in 2017.
“The wood development company will be up by 2020, and will employ around 5,000 Liberians,” Mr. Chen continued.
Three of Shangyou Wood Development Company’s Corporate Social Responsibility gestures for the host community, as well as surrounding Towns, would be: provision of educational materials to schools, building of a basketball court, and teaching of Chinese Language, the Company’s General Manager disclosed.
“The locals’ understanding of Chinese Language will make interaction between the Company and the Community easier and will boost economic between the two,” Mr. Chen said.
But there are challenges.
“Finding the right type of rubber wood in Liberia is extremely difficult,” Mr. Chen pointed out.
“Old rubber wood can’t produce latex. We don’t need wood for fire coal, for cooking; we need wood for furniture,” the Company’s Liberian Operations Manager, Nyema Klon Bruce, said to the two interviewers, buttressing  his Chinese colleague’s worries.
There have been reports of resistance to erection of a ‘foreign company’ on a ‘community land’ by some locals in other parts of Liberia.
“We didn’t encounter such action by the people in this place, Morris Farm,” General Manager Eric Chen answered the freelance journalist’s question.
Shangyou Wood Development Company has come to be in the Morris Farm community for forty years, beginning from 2018, General Manager Eric Chen said to this writer during a confirmation-chat, via telephone, two days after the one at the groundbreaking ceremony in Margibi County.
“We rent the place for forty years, and we have spent only four months at this place now,” Mr. Chen disclosed.
By Samuel G. Dweh/freelance journalist
﻿