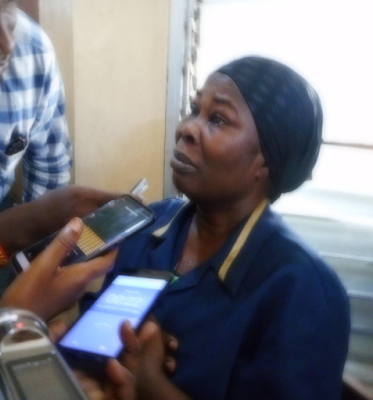 Hawa Bangura, a Sierra Leonean woman tried and found guilty of human trafficking, will have to spend eight years of her life in a Liberian prison.
She was sentenced on Thursday, January 17, by Presiding Judge Roosevelt Willie when he rendered the final judgment in the human trafficking case involving Defendant Bangura who has been detained at the Monrovia Central Prison since her arrest on November 30, 2017.
Though, one guilty of human trafficking by law is required to spend the maximum sentence of 10 years, Judge Willie of the Criminal Court”A” at the Temple of Justice stated that the court could not sentence Defendant Bangura for 10 prison years because report obtained by the court from the Probation Office about her character shows that she had no previous criminal record.
Judge Willie then ordered the Ministry of Justice to work with the Ministry of Gender and that of the Foreign Ministry to ensure the repatriation of the two victims involved with the case back to Sierra Leone, their homeland.
Defense lawyer Cllr. Joseph Debbley took exception to the ruling and announced an appeal to the Supreme Court during its March 2019 Term, which is just a month away.


Chief Prosecutor w, who is also the Assistant Justice Minister For Litigation, Cllr. Wesseh Alphonsus Wesseh hailed the ruling, saying that the prosecution had no problem with the ruling because it was in line with the law.
“The state has no problem with the Judge’s ruling because it was in line with the law, this case should serve as a deterrence to those in the habit of getting involved with criminality that the state is prepared at all times to prosecute those involved with criminality,” Chief Prosecutor Wesseh told this paper.
Defendant Bangura, who was in court for the ruling, wept bitterly claiming that she was innocent and that the crime levied against her was a set-up by the man she identified as Lahai Kamara but felt short of saying how Lahai set her up.

Bangura told reporters that she did not plan to sell victim Famata Kanu, 37, and her daughter Kadiatu Kromah, 4.
“ I am stranger in Liberia, I don’t have nobody here to take care of me, I am surely going to die in jail because even my children back in Sierra Leone don’t know I am here,” Defendant Bangura cried out.
Court record shows that Defendant Bangura was arrested on November 30, 2017 in the Banjor Community when a motorcyclist Lahai Kamara reported that she had made a plan to sell two other Sierra Leoneans.
Kamara alleged at the time that the Bangura persuaded the two persons, brought them to Liberia under the pretense of buying used clothes to be taken back to Sierra Leone.
According to the court record, Defendant Bangura was allegedly caught red-handed while in the process of selling the two victims for US$ 3,000.00