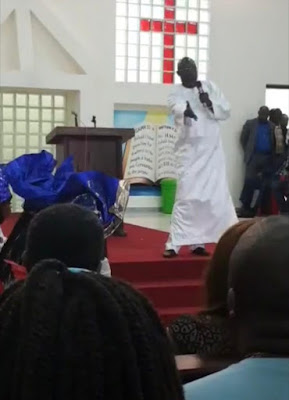 MONROVIA – From a soccer legend to a politician who served as Senator, now President George Weah has a new calling – a preacher.

The Forky Jlaleh Family Fellowship Church, President Weah’s Church, was dedicated on December 31, during a watch night service ushering in 2019.
The service and dedication ceremony was well attended. The Senate Pro-Tempore, Albert Chie, Speaker of the House, Bhofal Chambers and a host of officials of government attended the service.
The President preached on the theme: “Life is a business; what you do with your life will make you profitable or unprofitable”.
In his sermon, President Weah urged his congregation to begin 2019 with passion and commitment to whatever endeavor they commit themselves to.
Referencing the Biblical Parable of the Talents in Matthew 25:14-30, the President said God has given each and every person talent that they can use for their own benefit.


“God gives to everyone talent according to their own managerial ability. God doesn’t give you things that you can’t take care of,” he said.
He also urged his officials to be committed to whatever post or assignment given them and refrain from sabotaging the government.
Pres. Weah: “You work with government then you want to sabotage the government. You are a Minister in the government but you want to sabotage the government.  You are an executive then you want to sabotage the government. You want to sit right here so that government work. You are also part of the government”.
He, however, urged them not to be deterred by negative or doubtful thoughts and words.
“Let’s up forget about all the setbacks in 2018 and focus on the prosperous New Year, what God gave you is enough,” he said.
Meanwhile, as many Facebook users questioned the essence the President opening a church, Deputy Information Minister for Technical Service, Mr. Boakai Fofana responded: There’s a story behind the Church. Contrary to what many have started to impute, it’s not vain glorious. So, the President and his family have customarily had a small weekly service in his home, from time immemorial.
Each week, a family member will join the tiny congregation. The group outgrew his abode, and so he decided to build a little edifice to continue the practice. That’s what he will be dedicating tonight – with him as the preacher since that has always been the case at his home. Pres George Weah’s grandmom raised him around churches; that’s his comfort zone.