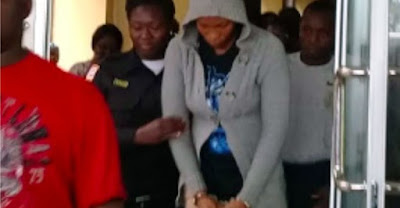 The Criminal Court “A” at the Temple of Justice in Monrovia has sentenced a woman believed to be 26 years old, Jonetta Pinky Abul to 25 years imprisonment for murdering her fiancé, Morris Johnson.
In his final judgment Monday, 7 January, Judge Roosevelt Z. Willie ordered that Pinky serves 22 years behind bars, and three years on parole, based on proof of good behavior.But both prosecutors and defense counsels have taken exception against Judge Willie’s ruling.
Government lawyers are contending that the law here is clear that the punishment for murder is life time imprisonment or death by hanging; while the defense too announce that they will appeal against the judge’s decision before the Supreme Court of Liberia.
Prosecutors say Pinky killed the late Morris at her S.K.D. Sports Complex Community residence on 14 June 2018 with a kitchen knife that she says she brought forth to scare the deceased during a night time altercation with the deceased.
But she denies the charge of murder. Earlier to the sentencing of Pinky, Judge Willie on Monday denied a motion for new trial filed by her lawyer Cllr. Arthur T. Johnson in challenge to a guilty jury verdict handed on 31 December 2018.
Judge Willie rules that the issue of criminal agency that was used to stab the late Morris is not in dispute because all of the witnesses testified to knife, saying Pinky testified that during a fight with Morris, she said she went for a knife to scare him.
He rules that as far as the court is concerned, there is no doubt because two persons were in a fight and one of them took a knife.
Judge Willie says defendant Pinky cannot use the principle of self-defense, heat of passion and battered woman syndrome and at the same time say she did not stab Morris Johnson which led to his subsequent death.
Her lawyer Cllr. Johnson is accusing jurors in the case of ignoring the principles of reasonable doubt, self-defense, heat of passion and battered woman syndrome, read to them by the Criminal Court “A”.
He contends that every person is required to place his life first in defense. According to him, defendant Pinky would have pleaded affirmatively under self-defense [given] the circumstances under which she was at the mercy of the brutal hands of the late Morris, but she did not stab the deceased because she loves him.
Cllr. Johnson believes that the evidence presented before trial jury did not support the verdict returned by the jury, asking the court to set aside the verdict and grant the motion for new trial.
Citing defects in the trial, Cllr. Johnson says prosecution fails to prove the case beyond reasonable doubt, arguing that the indictment did not describe the knife allegedly used to murder Morris but prosecution brought a green knife as the murder weapon with no suspect’s fingerprint or the deceased’s blood stains.
According to him, Morris’ clothes were not produced in the case, no autopsy conducted and the coroner [jury] gave a testimony that he is not qualified to make, among others.
But prosecutors counter argue that no reasonable mind can insinuate that the verdict is contrary to the evidence, informing the court that the murder weapon was presented, testified to and affirmed, and became subject to jury scrutiny.Montserrado County Attorney Cllr. Edwin K. Martine describes the motion for new trial as spineless and cannot hold water.
By Winston W. Parley-Edited by Othello B. Garblah﻿