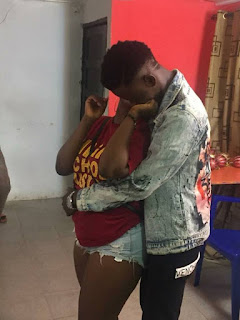 According to LIB Life, Jaredo and his former records labelmate Davero are in a love relationship.
The pair are yet to officially announce their rumored relationship; however a leaked photo of them kissing in a lonely place and a number of public appearances by the two of them suggests the two are an item.
The source added the two have been dating for more than a month now and things are actually moving on well between them by hanging out and getting to know one another.


“Both artists are madly in love with each other and want to make the relationship serious,” the source said.
Jaredo’s new love, Davero, who worked with the SOG record label for a while, is one of Liberia’s emerging female singers.
As a highly successful star in her own right, Davero, 26, is currently one of the top grossing female artists in the country and has shared stages with top artists like Nigerian artists Davido, Kcee, Flavor and Tekno. She is also MTN LMA’s best female artist of the year (2018).
When contacted, King Jaffar Jaredo, manager and owner of SOG records, did not deny or confirm the news about the relationship.


King Jaffar added: “All I know is that the pair has been seeing each other lately and hanging together. I hope their closeness is about work but, if it is about a relationship, I will gladly accept it. Davero is a sweet and nice really nice girl.”
Davero’s new lover, Jaredo, 18, is an upcoming Liberian music sensation who burst on the music scene with hits like “Wait for You” and “Nobody” — featuring Stunna and PCK respectively.
The singer-songwriter who recently won the prestigious MTN Liberia Music Awards’ New Artists of the Year category in an interview with LIB Life last year said he became obsessed with music after listening to some of Wizkid’s songs.
“I never thought of becoming a musician until I started listening to Wizkid’s songs, and his story inspired me to pursue a similar path. Although when I started singing, I was not too good, I worked hard to perfect my voice and to bring something new to the music industry.”