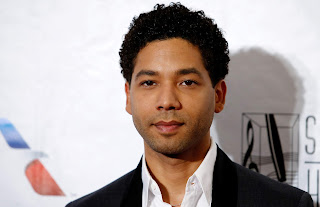 Police in Chicago has released the mugshot of Jussie Smollett hours after the actor was arrested for allegedly lying to police about being the victim of a homophobic attack.
The 36-year-old “Empire” star is dressed in a black puffer jacket and looks weary in the photo.

He turned himself to the police today around 5 a.m. local time.
A bail hearing has been set for this afternoon.
Smollett, who is gay, claims he was the victim of a violent racial assault on January 29 in which two attackers shouted racist and homophobic slurs, poured liquid substance believed to be bleach on him and threw a rope around his neck.