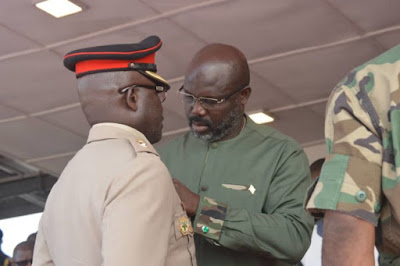 The Ghana Armed Forces (GAF) had a further shot in the arm as being a special contributor to international peace, when the Government of Liberia conferred a high national award to Lieutenant Colonel (Lt-Col) Emmanuel Larbi Sarpong Gyadu, Commanding Officer (CO) of GAF’s Army Recruits Training School (ARTS).


On Monday, February 11, 2019, the President of the Republic of Liberia and Commander-in-Chief of her Armed Forces, George Manneh Oppong Weah, decorated Lt-Col Gyadu with Distinguished Service Order (DSO), at a parade to mark the 62nd Armed Forces of Liberia (AFL) Day.
A citation accompanying the award read “Your service to our country brings credit upon yourself, the Ghana military, the Government and People of Ghana and the men and women of the Armed Forces of Liberia”.


It further reads, “Lt-Col Gyadu’s outstanding support to the AFL is in keeping with the finest tradition of military service and reflects distinct credit upon himself, his family and the Ghana Army”.


Lt-Col Gyadu was the first Ghanaian military officer seconded to the AFL from December 2007 to June 2009, in furtherance to the Memorandum of Understanding (MoU) between the governments of Ghana and Liberia on military and security assistance.


The ARTS’s CO was influential in putting together the 2nd Infantry Battalion of the 23rd Infantry Brigade of the AFL and was appointed Commander of the Battalion and was part of the team that drafted the Uniform Code (UCM) for the AFL.


He also introduced training in Fundamental Officer Training (FOT) for young officers of the AFL and was involved in drafting the first Exercise Instruction and Scenarios for the new AFL.
Lt-Col Gyadu also mentored the current leadership of the AFL and with the assistance of the United States Contractors, tailored the training package to suit current needs of the AFL.


In an effort to encourage hardwork amongst soldiers of AFL, he instituted an award scheme for hardworking and outstanding soldiers in the 2nd Battalion, which he funded from his own resources.
The Ambassador of Ghana to Liberia – Ernest Burke Asare-Asiedu, who graced the occasion, said, “… you were the first ECOWAS Mentor to the AFL, where you demonstrated your best as a Ghanaian military officer. Accept our respects”.
Other dignitaries present at the ceremony were the Minister of National Defence of Liberia – Major General Daniel D Ziankahn (rtd) and some Defence Attaches of foreign missions in Liberia. ﻿