Alabama Kicker Given Letter Of Support By Bush

December 12, 2013
TUSCALOOSA, Ala. -- Alabama kicker Cade Foster endured more than his fair share of criticism after missing two field goals and having a third blocked during a last-second loss to Auburn on Nov. 30. 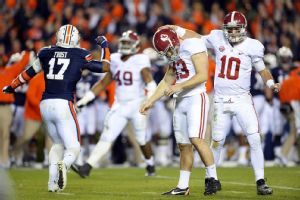 The 34-28 defeat, blamed largely by the public on Foster's faulty leg, ended the then-No. 1 Crimson Tide's undefeated season and knocked them out of the SEC and BCS championship hunts.
Foster's teammates have since stuck up for him and many on social media have joined in supporting the senior from Texas.
But no text, tweet or Facebook message may compare to the letter Foster received from former President George W. Bush. On Wednesday, Foster tweeted a picture of the hand-written letter dated Dec. 3, 2013.
It began, "Dear Cade (#43), Life has its setbacks. I know! However, you will be a stronger human with time. I wish you all the best."
It was signed, "Sincerely -- another 43" referring to Bush being the 43rd President of the United States. 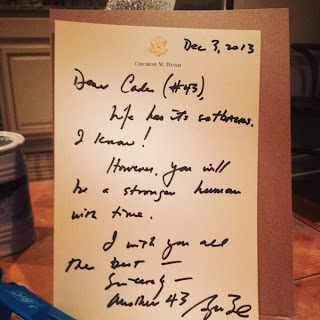 Foster, who wrote "Framing this" along with the picture of the note, tweeted a few days after the Auburn loss reflecting on the insults and threats he received.
"My teammates are 100% behind me," he wrote, "and I can't love them enough for that. Also thanks for the supportive messages from Fam, Friends, and Fans."

Alabama quarterback AJ McCarron said he spoke to Foster after the Auburn game, encouraging him to, "Hold your head high."
"Cade's a great kid," McCarron said. "It wasn't all his fault. Other people struggled. I love him to death and I have all the confidence in him in the world that he could go out there right now and make the kicks. The one thing about him is he needs to keep his head high and be proud.
"Like I said, football is just a game. It's not life. Times like this people need to realize the sun's going to rise tomorrow."