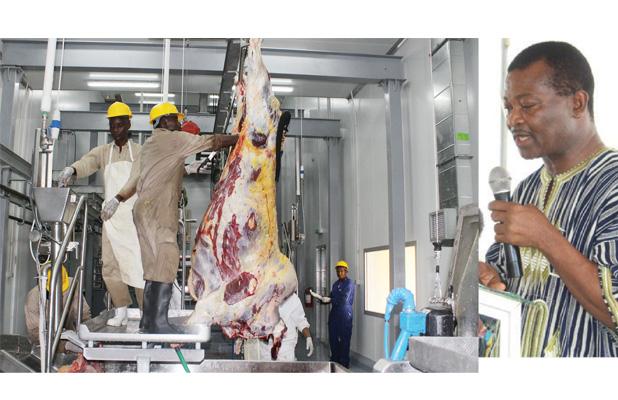 Careysburg, Montserrado County - As part of the private sector contribution in helping the Government of Liberia to improve the agriculture sector, Land O’Lakes International Development and Conex/M.D Sow and Associates Enterprise Inc. has unveiled a newly-completed state of the art slaughter house in Careysburg, Montserrado County.
Report by Edwin G. Genoway, Jr- edwin.genoway@frontpageonline.com
Worth over US$4 million, the open and ribbon cutting ceremony was attended by senior government officials and other dignitaries, key sector players and stakeholders from the development sector as well as the international development sector.
The Careysburg Slaughter House is the result of a four year partnership between Land O’Lakes International Development and Conex/M.D Sow and Associates Enterprise Incorporated with funding from the American People through the United States Agency for International Development (USAID) Department of Agriculture’s Foreign Agriculture Service.
As a one of a kind facility in the country, Careysburg slaughter House is poised to provide Liberian consumers with safe alternative to existing meat supply, including bush meat while stimulating growth across the livestock value chain.
The slaughter house is designed as a profitable enterprise with the capacity to slaughter twenty (20) heads of cattle and fifty (50) heads of small stock per day under international food safety and hygiene standards.
True modernization
The chief guest at the ribbon cutting ceremony of the slaughter house, Agriculture Minister Dr. Moses Zinnah, welcomed the idea of a modern slaughter house built in Liberia, saying the investment represents true modernization.
The Minister of Agriculture said it is the responsibility of his Ministry to promote the dream of the private sector that brings value to the agriculture sector in Liberia.
“Our goal at the Ministry of Agriculture is not to produce food or make farm—we are here to promote the dreams of individuals or institutions that are making contributions in the agriculture sector,” he said.
Dr. Zinnah noted that Liberia, being member of the World Trade Organization (WTO), has to subscribe to international standards, especially in food processing like the Careysburg Slaughter house.
“We are member of the WTO now, so everything we do nowadays should meet international standard. I believe this new establishment will serve as an example so we can point at to the WTO. So on behalf of the president and government of Liberia we say, we welcome this investment,” he noted.
Eating cleaner and safer meat
The chairman of the Board of Conex / M. D. Sow & Associates Enterprise Inc,. Mr. Samuel Thompson said it has been a long journey since 2007, when M. D. Sow & Associates applied to the US African Development Foundation, to support its cattle breeding and multiplication program.
“Today, by God's grace and with the help of our various partners, we have a modern slaughter house that can process and store minimum 20 cows plus 50 sheep and goats per day, according to international food safety and hygiene standards.  However, if more cold storage capacity is available in-house or downstream, we can slaughter more than 200 cows per day,” he noted.
The Careysburg Slaughter House and other activities being coordinated by the Ministry of Agriculture with Land O' Lakes, will help transform Liberia's livestock sector.
It will ensure that Liberians eat cleaner and safer meat products at affordable prices. It will also enable a large number of people throughout the country to get jobs and reduce poverty, through the livestock value chain.
“I can remember whenever my father, the late Alfred T. Thompson and I went to our village in Fishtown, Maryland County, that there were large herds of cattle in the grasslands and towns along the way. The people prospered because they had several sources of income,” he said.
“These included farming, fishing and cattle breeding.  Cattle was a source of wealth, to be sold to cover major needs like house construction, school fees, health care, or to pay the bride price.  However, the civil war destroyed Liberia's livestock supply”.
According to the FAO, Liberia has less than 1.0% of West Africa's livestock population. Liberia has only 36,000 cattle and 430,000 sheep and goats compared to Guinea, with 1.7 Million cattle and 2.2 Million sheep and goats respectively.  La Cote d'Ivoire has 1.3 Million and 2.7 Million respectively, according to the FAO.
Cattle imports from neighboring countries are a drain on Liberia’s foreign exchange reserves as well as balance of payments. They are also a major source of insecurity in Liberia's food supply.
He said the opening of the modern slaughter house outside Monrovia opens the door for Careysburg Slaughter House to provide market access for a large volume of livestock produced by a vibrant domestic industry.
“We hope to achieve this by operating this plant efficiently, to add value in processing livestock into different products like prime cuts, ground beef, sausages, meatloaf, salted and dried meat over time,” he said.
Thompson noted that the industry needs additional support from the Government of Liberia and other stakeholders, saying there is a need for patient capital and technical support for breeding and multiplication of disease and climate-resistant livestock.
According to him, there is a need to train veterinarians and livestock breeding technicians at the University of Liberia plus other tertiary institutions, saying there is also a need to close down existing slaughter facilities to avoid serious health risks to the population.
Within the WTO framework for poor countries, livestock industry will need protection against imported and often inferior meat products.
“Liberia needs time to rebuild its decimated livestock supply through breeding and multiplication. Liberia needs time to improve food security and to reduce poverty, through massive involvement of local citizens in the livestock value chain.”
He noted that Liberia also needs time to provide suitable alternatives to bush meat consumption, which is rapidly depleting the country rich biodiversity.
He disclosed that the vision of Careysburg Slaughter House is to reduce the cost and composition of Liberia's protein intake by the mass marketing of high quality, cleanly prepared and safely stored meat products.
He concluded that the slaughter house will increase employment, reduce poverty, improve food security, and foreign exchange position, while increasing shareholder value.