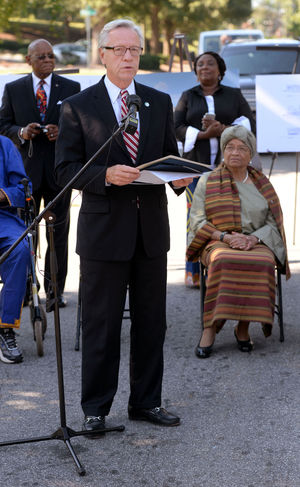 By John Hinton Winston-Salem Journal
The city of Winston-Salem named Liberia Street for Liberian President Ellen Johnson Sirleaf in a ceremony Saturday in the city’s oldest black neighborhood. Mayor Allen Joines read a proclamation naming the street “President Sirleaf Lane” to about 50 people who attended the ceremony. Many of the attendees are current or former residents of the Happy Hill Garden neighborhood.
The sign in Sirleaf’s honor is at the intersection of Liberia and Alder streets.

“She is a true definition of freedom, justice and equality for all people of Liberia,” Joines said of Sirleaf in the proclamation.

Sirleaf visited Winston-Salem this weekend as part of her trip to the United States for the U.N. General Assembly’s annual meeting in New York. She is the first foreign head of state to visit the city during Joines’ 15-year tenure as mayor.

Sirleaf, 77, is the first democratically elected female president of an African nation. A graduate of Harvard University, Sirleaf is a former World Bank economist.

She is serving her second term as president of Liberia after she was re-elected in 2011. During that year, Sirlear shared the Nobel Peace Prize with two other women — Leymah Gbowee of Liberia and Tawakkul Karman of Yemen.

Sirleaf said it was a great honor to have Liberia Street named after her.

“I’ve resisted at home people naming things after me because I said ‘you don’t that when I am in office. Do that when I leave office,’” Sirleaf said jokingly. “Since this is not at home, I am pleased to accept it. It’s not only a honor for me, but also it’s a honor for the Liberian people.”

Sirleaf Lane or Liberia Street was part of the Schumann plantation in the early 1800s. Dr. Friedrich Schumann freed his slaves in 1836, and they traveled to Liberia, where many freed blacks from the U.S. settled. Most of Happy Hill’s first settlers were former slaves who had lived or worked in the Moravian town of Salem.

In 1872, the freed slaves bought plots of land in the community that became known as “Liberia” and “Happy Hill.” By the 1920s, it was known mostly as Happy Hill.

James Hunder Sr., the president of Liberian Organization of the Piedmont, told the crowd that the naming of Liberia Street for Sirleaf was an historic moment.

“We gather here and stand on the broad shoulders of former slaves and former slavemasters,” Hunder said.

He then announced a proposal to build a dormitory in Happy Hill for students from Liberia who would attend local universities and colleges. The project is his organization’s way to help educate Liberian students who would return to their country and help rebuild it.

Rence Callahan, a partner with Walter, Robbs, Callahan and Pierce, a local architectural firm, said the project would be a 20-bed, two-story house with office space. There is no timetable for construction, and the Liberian Organization of the Piedmont would lead efforts to pay for it, Callahan said.

The project would cost between $1.75 million to $2 million, he said.

Liberia suffered from a 14-year civil war followed by the Ebola epidemic in 2014, Hunder said. The West African country’s population is about 4.5 million people.

More than 250,000 died in the Liberian civil war that ended in 2003. A decade later, Liberia was ravaged by the Ebola epidemic that left more than 4,800 people dead.

Sirleaf has been credited with helping rebuild her country and maintaining peace after the war, Joines said. Her second term as president ends in January 2018.

In her remarks, Sirleaf thanked Hunder and the Liberian Organization of the Piedmont for their efforts to help Liberian students.

After the ceremony, Sirleaf talked briefly about the possibility of Hillary Clinton being elected in November as the first female president of the United States.

“We look forward to working with female heads of state all over the world, including in the U.S.,” Sirleaf said.

Apostle Edith Jones, the president of the Ecclestiastes Deliverance Center on Alexander Street, said she welcomed Sirleaf’s visit to the Happy Hill neighborhood.

“We are very excited to see such a beautiful woman who has done so much for her country,” said Jones, the vice president of the Happy Hill Neighborhood Association. “It was a beautiful experience.”

How easy do you think it should be to recall an elected official?
Story: Tobaccoville mayor recall election on November ballot
Disclaimer: This is not a scientific poll 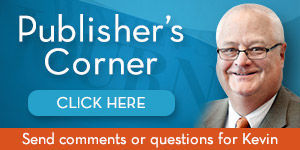