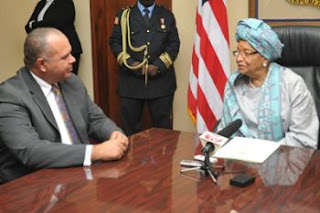 The Brazilian Ambassador to Liberia has challenged Liberians to stop looking outside for solutions to their country's problems, noting there is "Too much faith in the solutions coming from outside; you can do better." Ambassador Andre' Santos says Brazil has lots in common with Africa in terms of the Slave Trade and "Because we face the same budget constraints; social constraints."
In a breakfast chat with reporters over the weekend at a local hotel in Monrovia, he says Liberia could learn a lot from Brazil in the area of agriculture, particularly food production. "I think there is lot Liberia can learn from Brazil; I think Liberia has seen that outside solutions don't work everywhere", he says.
Turning to the current political crisis in his country and the pending Olympic Games in August, Ambassador Santos says both the Zika virus and the ongoing impeachment process against President Dilma Rousseff will not derail the games to be hosted in the Brazilian capital, Rio de Janeiro.
He says the Brazilian Ministry of Health has embarked on vigorous awareness about the Zika Virus in areas that seem critical, coupled with huge campaigns both on radio and television to educate the population ahead of the games.
Zika Virus is spread to people primarily thru the bite of an infected Aedes species mosquito. The most common symptoms of the virus include fever, rash, joint pain, and conjunctivitis or red eyes. It mainly attacks pregnant women, leaving their unborn babies with small heads and brain deformity.

An alert issued by the Brazilian authorities called on tourists and travelers bound for regions affected by the Zika Virus to take basic precautions, saying the Brazilian government is following all safety standards set by the W.H.O. for controlling and preventing the virus, which main attacks pregnant women.
According to the W.H.O., there should be no general restrictions on travel or trade with countries, areas and territories with Zika Virus transmission.
"Pregnant women should be advised not to travel to areas of ongoing Zika Virus outbreaks; pregnant women whose sexual partners live in or travel to areas with Zika Virus outbreaks should ensure safe sexual practices or abstain from sex for the duration of their pregnancy", the alert further warns.
Meanwhile, the International Olympic Committee has expressed confidence and support for Brazilians to deliver successful Olympic Games in August.
A press release issued by IOC Coordination Commission Chair Nawal El Moutawakei says the Commission's confidence was reinforced by the fact that many of the venues are finished, and with 98 percent overall completion, 33 test events had been successfully completed with positive feedback from the competing athletes; and that popular backing for the games remains strong with over 70 percent support in Rio de Janeiro. "This final figure underlines that the local citizens see the Games as a positive element in the development of their city and country", the release read.

At the same time the World Sailing has expressed satisfaction with progress being made by Rio 2016 and the Brazilian authorities in preparation for the Rio 2016 Olympic & Paralympic Sailing Competition.
Medical Commission representative Dr. Nebojsa Nikolic said: "I am satisfied with the planning work that is being done ahead of the Games to ensure that the welfare of sailors remains the top priority and that appropriate water testing and protocols are in place to inform decision making at the Games. We will continue to monitor water testing date closely and to educate sailors and officials on what they can do themselves to reduce health risks ahead of the Games."
The Olumpic flame will be lit on 21 April in Ancient Olympic and the Olympic Torch relay will begin in Brazil on 3 May.