“OUR SOLIDARITY COMPELS ADMIRATION” Mahrez opens up about the secrets of Leicester City. 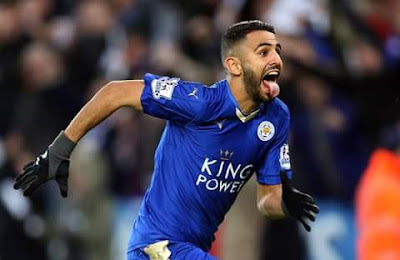 The PFA player of the year, Riyad Mahrez has said his team mates are living in a bubble as they are about to win the club’s first-ever league title.

“Not too much, no. although we feel something is happening in England, but we live in our bubble” replied when asked if he was aware that the whole Europe is willing Leicester to win the EPL title in an interview with L’Equipe Magazine
One thing that is evident when Leicester step on to the pitch is their bond of unity and willingness to give everything to win the game. They are not financially sound and have the quality of players like the Liverpool, Arsenal, Manchester United, Manchester City, Chelsea and Tottenham Hotspurs.

Mahrez said “we do not have the best players, nor the biggest budget, but our solidarity compels admiration. We had a bit of luck too. It was this year or never. Until January, we did not think of the title. It has become possible, but we will not let it go to our heads.”
He again talked about how late some of his players realised their potentials as professional footballers and how he makes fun even on the field of play. 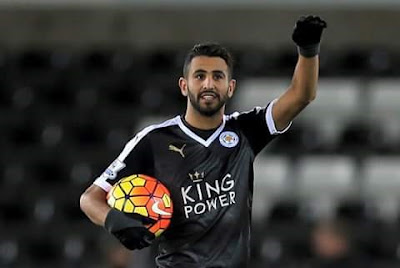 “We were not programmed to become pros. We live with some form of carelessness. With N’Golo Kante, we laugh. It is impossible in our history, even if nothing is done. Wes Morgan, our captain was also detected later on. But frankly, internally, there is no difference between conventional pros and us. It is nice. Jamie Vardy and myself we have fun during matches. With him, it shows on TV more than me, but we are all casual.”
The 25 year old Algerian compared the seriousness attached to football in his time in France and now in England. He talked about how funny he was in France and how that has lessen in England.
“In Sarcelles, you already told me to stop laughing because I was chambrais (mess about) constantly. I am a very funny guy. Finally, I do not want to get flowers…. I am having fun. In France, in the clubs where I was at, I was a little Djamel Debbouze (a French comedian) group. A little less here in England.”