RIYAD MAHREZ: FIRST AFRICAN TO WIN THE PFA PLAYER OF THE YEAR

The Algerian international has won the prestigious award after a fantastic season that has seen him score 17 goals and 11 assists that has helped Leicester lead the table of the Barclays Premier League.
The Professional Footballers Association (PFA) awards was held yesterday and it is an award where the footballers in the English Premiership vote for their best player under the year of review.


Riyad Mahrez saw of competitions from his team mates, Jamie Vardy, N’Golo Kante and Harry Kane of Tottenham to win the prize. The Algerian’s spectacular performances have drawn comparisons with the best players after stepping up for the Foxes this season.
He has been awesome for Claudio Ranieri’s side with his 17th goal on Sunday against Swansea City in a 4-0 thumping at the King Power Stadium. Mahrez has also contributed 11 assists for Leicester who are still in many peoples books remain firm favourites to lift the English Premiership for the first time with just 3 games left to play.
The Algerian international’s Leicester team mate Vardy came second per the votes with Kane finishing in third place. 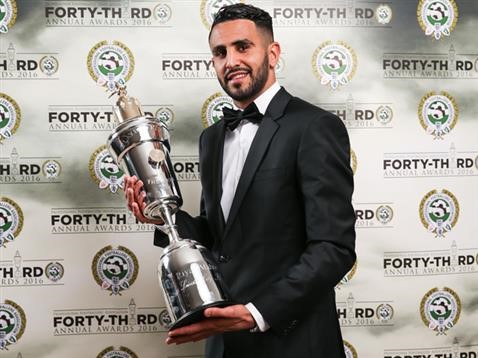 Speaking after winning the PFA player of the year, Mahrez said “it is special because if the players vote for me it is because they’ve seen I’ve been great this year so I’m happy. Without my team mates I wouldn’t get this award. We are like brothers, it’s everywhere on the pitch. That’s our strength. If sometimes we are not good, we know we are going to run and make the efforts for our team mates. This is the secret of our success”
Mahrez becomes the first Leicester player to ever win this award and also makes it historic by becoming the first African to win this accolade. The 25 year old also becomes the first ever player not to play for Manchester United, Arsenal, Chelsea, Tottenham or Liverpool since Alan Shearer won it playing for Newcastle in 1997.

In other recipient of awards at the ceremony, Delli Ali of Tottenham received the Young Player of the year, Ryan Giggs won the PFA Merit Award and Jamie Vardy was given recognition for his record 11-goal scoring streak in the EPL.
As an African, I am proud of Riyad Mahrez and I am sure most of Africans are very proud of him as well.
Congratulations!! To our Algerian brother.