ARSENE WENGER: FANS WOULD ONCE KILL FOR HIM, NOW THEY WOULD RATHER KILL HIM

In 1996, when Arsene Wenger was appointed the manager of  Arsenal Football Club, journalists and fans alike asked a question that showed their discontent and shock and to a larger extent their disrespect, “Arsene  Who”?
I was a little boy back in 1996 and to be honest didn’t know anything about football. I was just 7 years when Arsene Wenger was appointed and didn’t know much about the scepticism that surrounded his arrival in 1996. I found out about it in one of my numerous readings when I became an Arsenal fan just before they went unbeaten in the 2003-2004 season.

Arsene Wenger was brought in by the then Chief Executive Officer, Mr David Dein who I suppose knew Wenger and trusted him so much. What was interesting was that, Arsene Wenger was arriving from Japan where he was managing a Japanese side called the Nagoya Grampus Eight from 1995-1996.

Arsene Wenger quickly proved his doubters wrong by winning in 98 and 2002 seasons and endeared himself to the fans. Arsenal that was touted as “boring boring Arsenal” were suddenly playing the most beautiful football ever seen on English soil and British soils at large with players like Dennis Bergkamp, Patrick Vieira, Thierry Henry, Robert Pires, Freddie Ljumberg, Ashley Cole, Sol Campbell, Kolo Toure, Jens Lehmann to mention a few.

Arsenal moved to the Emirates Stadium from their beloved home ground, Highbury in 2006 exactly 10 years after Wenger’s appointment. That was in truth supposed to be a big big step forward and a catalyst for positive changes and transformation in terms of finances and trophies. Unfortunately, Arsenal FC have won 2 FA cups since moving to the Emirates in 2013-2014 and 2014-2015 seasons. The emirates stadium has seen so many talented footballers like Cesc Fabregas, Robin van Persie, Samir Nasri, Andrej Arshavin, Tomas Rosicky, Jack Wilshere, Alex Song, Mathieu Flamini, Emmanuel Adebayor etc.

Players would always want to win trophies and Arsenal FC could meet their objectives so they left for clubs that were winning trophies seasons in seasons out. Arsenal were not competitive in terms of player purchases and paying big wages simply because they were paying for the cost incurred in constructing the Emirates Stadium.

In 2013, Arsene Wenger publicly stated that he is ready to spend big on quality players and backed his comments up with signings of Mesut Ozil and Alexis Sanchez for 42.2 and 35 million pounds respectively. With all these two players Arsenal has not won the English Premier League and has only 2 FA cups to show for it.

To the amazement of the football world and the annoyance Arsenal fans, Arsene Wenger decided against buying an outfield player in the summer. He only brought in Petr Cech a goal keeper from Chelsea FC. He turned blind on the main problems of Arsenal that is, in the striking position, the defensive midfield and the defence itself with a centre back needed. He came up with excuses that he didn’t find anyone of quality on the transfer market that would improve his squad, which clearly didn’t add up. He always comes out with excuses like that for the past decade and Arsenal has been finishing 4th for so long and fans obviously are not happy about it especially after seeing Leicester City and Tottenham Hotspurs perform better than Arsenal.

Arsene Wenger as I type this article is beginning to lose his most loyal supporters. In his recent press conferences, he seems to be taking jibes at his own fans who has previously and currently been expressing genuine concerns. Arsenal fans has been enduring so much pains for far too long and I feel their needs are not catered for. Their relationship with Wenger especially this season is not the best. Wenger has been subjected to insults on various social media and has received lots of boos inside the Emirates stadium. Now their chances of winning the league is over after so much promise and even finishing in the top 4 is becoming a difficult task. 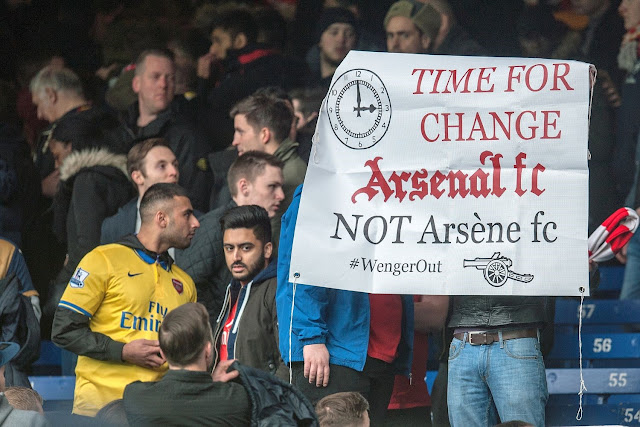 What irks Arsenal fans are his recent comments that Arsenal will survive if Spurs finish above them that amounts to apathy. That actually has not happened since he took over in 1996. He does not listen to the fans anymore and there is obviously no sign of enthusiasm to mend the broken relationship between himself and the fans. 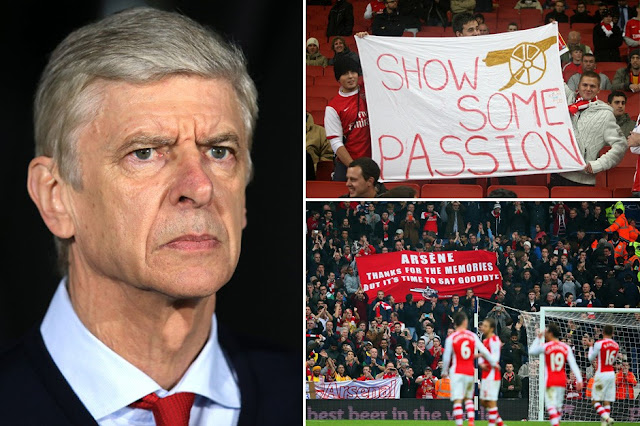 A man that was idolised and revered so much is now hated by the fans. Fans come to the stadium with banners thanking Wenger for everything he has done but it is time for him to leave
My question is, has the relationship between Wenger and the fans run its course?