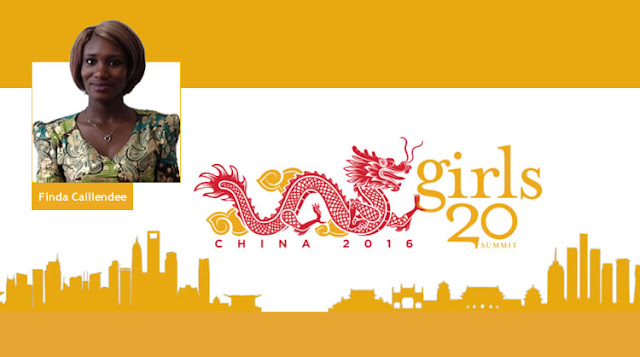 Monrovia - A 21 year old Liberian female studying economics and management at Cuttington University in Suakoko, Bong County, has been selected after a vigorous process to represent the African Union at this year’s Girls 20 summit in Beijing, China.

Finda Harriet Caillendee, is currently the President of the Cuttington Chapter of Safe Cities for Girls, a group dedicated to educating girls on improving values and self-esteem as they become women.
Finda will be joined by Amanda Hobana, a 20 year old from South Africa.
G(irls)20 places girls and women at the centre of the G20 economic decision-making process. The mission is to increase female labour force participation and to cultivate a new generation of leaders through education, entrepreneurship and global experiences.
One of the organisation’s key initiatives is the annual G(irls)20 summit, which is designed G20 style and follows the destinations of G20 summits each year.
Girls Summit is an international event that features young girls between the ages 17-21.
The 7th Annual G(irls)20 Summit will be held in Beijing, China on August 8th & 9th, 2016. Designed G20 style, the G(irls)20 Summit brings together one delegate from each G20 country, plus a representative from the European and African Unions, Afghanistan, Pakistan and the MENA region.
During the Summit, delegates attend skills building workshops (entrepreneurship, financial preparedness, communications, digital literacy, leadership, etc.), participate in panel discussion with local and global experts, and then produce a communique with tangible, scalable solutions towards increase FLFP. The communiqué is presented to G20 Leaders for their consideration.
More than 1300 people applied for the summit. This is the first time for a Liberian to be representing the continent of Africa.  She has since begun receiving congratulatory messages she was announced as the successful candidate.
In an interview with Media Link International, the Liberian Media Entity contracted to provide media guidance to the delegate, Miss Finda Harriet Caillendee in an exuberant mood said this is not only for Liberia, but the entire African continent and as such, Africans must show the support.
“This summit is very important to me because I am going to have a wide experience, meaning I am going to leave Liberia to somewhere in Asia; I mean this is very exciting and I am going to meet more young people with vast experiences and share ideas and find solution to problems affecting girls around the world and motivate each other and come out with recommendations that we can give to G20 leaders for implementation,” she said.
Speaking further, Miss Caillendee assured Liberian girls that she is going to lobby with her friends and experts at the summit to think about Liberian girls for more empowerment.
“I think this is a bonus for Liberia and pride to young women in Liberia because for the first time Liberian is going to that summit and I am going to give information about young women in Liberia and tell the world that Liberia is a country that have young girls who have the vision of becoming better leader of tomorrow. I am going to push for education for girls because education is very important. Females need to be empowered in Liberia,” she added.
Miss Finda Harriet Caillendee has seven siblings. Her father is the Dean of Education and Lecturer at Cuttington University while her mother is a business woman. She lives with her parents on the Robertfield highway.
Meanwhile, the Minister of Gender, Madam Julia Duncan Casell, has been officially written about Ms. Caillendee’s selection. The minister is expected to hold meeting with the delegate this week.