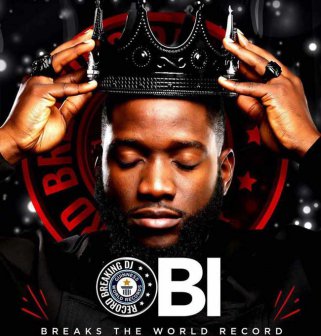 Braving through hallucinations after four days of no sleep, Nigerian Dj Obi earned himself the title for having played the longest set ever. Beating the previous record by Polish Dj Norbert Selmaj who held the record for 200 hours, the Nigerian native did an astonishing 240 hours at a café in Lagos.
Yet to be rectified by the Guinness World records, the recorded set met all standards required. The rules stipulate that only five minute breaks are allowed hourly, someone had to be dancing at all times and no song could be repeated after four hours of being played.
The Dj did the 10 day marathon taking disco naps for five seconds as sleeping would lead to disqualification.

‘’The moment we surpassed the current world record of 200 hours; it’s been an amazing journey - 9 days in; Thank you everyone! You all have been so supportive! WE DID IT TOGETHER!!’’ Dj Obi posted a day before he broke the record.