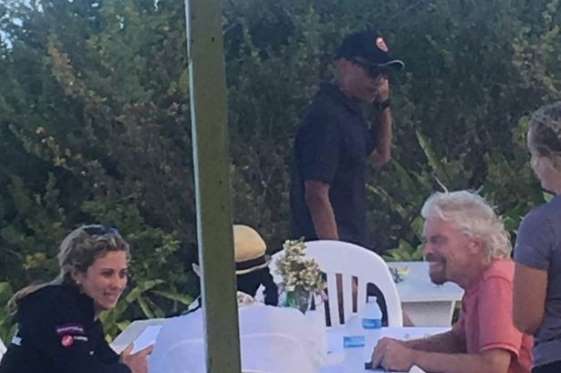 After eight long years as the leader of the free world, Barack Obama has been enjoying some well earned down time.
After handing over the Presidential reins to Donald Trump, Obama, 55, and his family flew to Palm Springs for a long weekend before heading to the British Virgin Islands.
Barack and wife Michelle were spotted enjoying lunch with Sir Richard Branson and his family on the island of Anegada.
Billionaire businessman Branson - who was outspoken in his views on Trump - owns nearby islands Necker and Moskito.
The Obamas arrived in the Virgin Islands on Branson's private jet last Monday, MailOnline reported.
The former first family looked happy and relaxed as they soaked up the Caribbean sun.
Barack ditched his suit and tie in favour of a black Nike polo shirt and shorts which he teamed with a baseball cap.
Michelle wore her hair in braids underneath a sun hat which she paired with a white beach dress.
Yesterday, Obama broke his silence for the first time since Trump's inauguration - offering his encouragement to people protesting against the new President's controversial Muslim ban.
In a statement, he welcomed the protests, which he said were "exactly what we expect to see when American values are at stake."
And in an even more pointed dig at his successor, he explained the difference between his pause on granting visas to Iraqi citizens in 2011 and Donald Trump's Muslim ban.
The statement says he "fundamentally disagrees with the notion of discriminating against individuals because of their faith or religion."
The Obamas will move into a nine-bedroom mansion in Washington DC after vacating the White House.
The sprawling £4.8 million home in DC's swanky Kalorama neighbourhood is said to be the new digs of Barack, Michelle, Malia Ann and Sasha.
The amazing property boasts nine bedrooms and is reportedly owned by Joe Lockhart — who served as the White House press secretary under Bill Clinton - and his wife, Giovanna Gray Lockhart, Glamour magazine's Washington editor, CNN has reported.
Built in 1928, the home boasts eight-and-a-half bathrooms, hardwood floors, a two-car garage and stunning gardens, according to property records.
The 8,200-square-foot property also features a foyer and gallery with a gorgeous black-and-white marble checkerboard floor, leading to an enormous living room.


There are two en-suite guest bedrooms with walk-in closets, as well as four smaller bedrooms on the top floor which could be used by Secret Service agents.
And there is a special suite that could be perfectly suited to First Lady Michelle Obama's mother, Marian Robinson, who currently lives with the family at the White House.
The impressive property, which is situated just two miles from the official presidential residence, was last sold in May 2014 for $5.3million (£3.6million), records show.

The family are said to be staying in the area for the sake of their youngest daughter, says the Las Vegas Review Journal .
“We’re going to have to stay a couple of years in DC probably so Sasha can finish,” he said in March.
“Transferring someone in the middle of high school? Tough.” Sasha attends the prestigious Sidwell Friends School in the city.
The Obamas may have to pay a whopping $22,000 (£15,000) a month to rent the mansion while they remain in DC, according to the real estate website Zillow.
The family already own a luxury 6,200-square-foot home in Chicago, Illinois.