February 02, 2017
Popular Kenyan gospel Singer, Eunice Njeri, who got married to her rapper boyfriend, Isaac Bukasa at a lovely ceremony on November 27 in Texas, decided she was no longer in love with him by the end of that same day and announced their separation.

Eunice's excuse for ending the marriage is that her heart was elsewhere. She left for Africa immediately after and made the separation public just yesterday. She is referring to it as an annulment because they did not get to sign the marriage documents before the separation, so that means the wedding never happened. Read what she wrote after the cut...


"On the 27th Nov 2016, Isaac and I did go to the altar to get married,butat the end of that day I realised one thing,icouldn't do it my heart was somewhere else. Probably in Africa doing what I do best,amstill trying to figure that out.

"I immediately left for Kenya and have been serving God the best way I know how. To all who supported isaacand iam greatfulmay God bless you immensely. To all who were hurt in the process I apologise. The marriage was annulled (like it never happenned). No papers were signed. Afterwards and we both made a decision to go our separate ways.

"I hope for your support and help as we move on. Like every other relationship we hit a rock, maybe a little too early but have since overcome. Consequently, we have decided to go our separate ways and hope for the very best. God bless you." 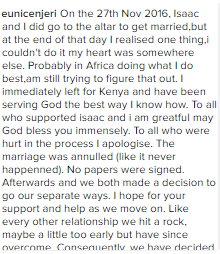