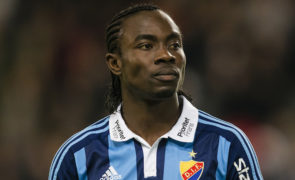 Liberian International Sam Johnson has rejected moves to top European clubs especially the Spanish league and has opted for the newly found football wealth ground China. Sam Johnson in a facebook post on Thursday, July 14, 2016 said: I know my fans are not happy about this but I have made a personal decision that will improve my financial situation. Johnson is hopeful he can make an impact in Chinese Fottball, a Liberian FA release have said.

Confirmed reports from Spain said the Liberian international was expected in that country this weekend where he was to chose from among 8 Spanish clubs with either Sevilla or Athletic Bilboa being his likely destination however with the move to a Chinese 2nd division club, the dream of Liberian football fans to see one of their rising stars in La Liga next season has ended. Swedish topflight Club Djurgårdens confirmed on its official website that striker Sam Johnson has signed for Chinese Club Wuhan Zall.
Wuhan Zall Football Club is a professional Chinese football club that currently participates in the China League One division under licence from the Chinese Football Association (CFA). The team is based in Wuhan, Hubei and their home stadium is the Xinhua Road Sports Center that has a seating capacity of 22,140
The striker move also put an end to continue rumors linking him with the likes of Russian big club CSKA Moscow, Scottish Giant Celtic, League One side Bordeaux and Lokomotiv Moscow as well as Europa League winners Sevilla. Johnson is the second Liberian player to move to China in recent time, with the former CSKA Moscow attacker Sekou Jabateh Oliseh signing for China League One club Dalian Yifang earlier this month.
The duration and value of Johnson’s contract was not disclosed by Djurgarden, but the Club officials have described the deal as economically worthy. Sam Johnson joined Djurgården from IK Frej during the 2015 league season and made instant success scoring 10 goals in 29 games. He continued to flourish this season, netting seven goals in 12 games. Sam, however, could not re-start the Olympics after he was hit by malaria, which is now under control.
The former Nimba FC attacker in a short time became one of the most attractive names in the Swedish Olympics, and now he’s ready for Wuhan Zall in Chinese second league.
“This is an economic one very good deal for Djurgarden and an important building block in our future sporting development. It gives us the financial and sporting action and increases the opportunities to succeed in our ambition for the future of Europe Games”, Djurgårdens sporting director Bosse Andersson told the Club’s official website. “Sam is another young player who in recent years has developed in Djurgården and able to move abroad. Sam Johnson has had a tremendous development during his time in Djurgarden”, coaches Pelle Olsson and Anders Johansson should be commended for his work with young players, says Bosse Andersson.
“I am very happy to have this opportunity. I have had a fantastic development as a footballer in Djurgarden and I want to thank Pelle Olsson and Anders Johansson of it. I have received a large Djurgården Heart during my time in the association and I want to thank Djurgarden Football, all the supporters and the whole family Djurgården,” said Sam Johnson. Djurgarden thank Sam Johnson for his time in Djurgarden and wish the best of luck in her future career.
Brief profile
Johnson started out playing for his village team before joining Liberian third division side New Dream FC.
With them he scored two goals in a cup game against Liberian Premier League club Nimba FC who were so impressed by his performance that they ended up signing him.
In 2011 Johnson travelled to Norway to trial with FK Haugesund. He impressed the Norwegian club, but only enough for them to offer him a youth contract, so he instead signed with Swedish club Dalkurd FF. He would however only stay there for a couple of months due to work permit problems. Johnson remained in Sweden though and played for fourth tier club Assyriska IF KF during the second half of the 2011 season.
For the first half of the following season Johnson stepped down one division and played for fifth tier club Juventus IF before once again returning to the fourth tier when playing for Härnösands FF during the fall. After the season he was awarded the title of “best midfielder” in the league Härnösand played in. Before the 2013 season Johnson trialed with second tier Superettan club Jönköpings Södra IF but was turned down.[6] Instead he signed a three-year deal with third tier club IK Frej.
In his second season with them Johnson, who was now playing as forward, became their top goalscorer as the club was promoted to Superettan. In December 2014 Allsvenskan club Djurgårdens IF announced that they had signed Johnson on a four-year deal.
Sam Johnson made his Allsvenskan debut for Djurgården in the 1–2 loss against Elfsborg on 5 April 2015. He got his first Allsvenskan goal in the 1–2 loss against Hammarby on 13 April.[9] After a successful first top flight season where Johnson scored a total of 10 times Djurgården turned down a 22 million SEK bid from french Ligue 1 club Bordeaux the following winter.