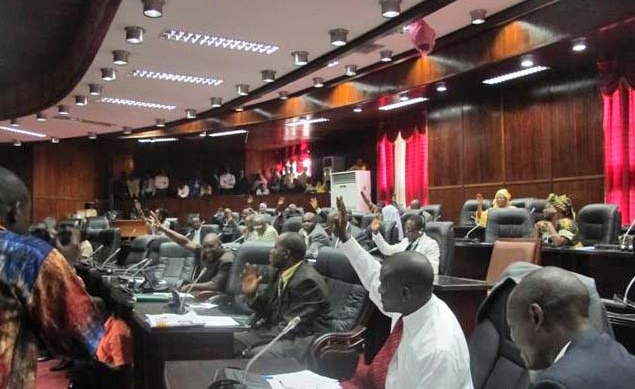 The House of Representatives is now divided with 34 Lawmakers on the side of House Speaker, Alex Tyler while 34 are also on the side of the anti –Tyler Lawmakers (Majority members). August 11,2016 session was held in separate chambers with House Speaker, Alex Tyler presiding over his 34 colleagues in their regular session on the other hand, Deputy House Separate, Hans Barchue presided over the ‘majority members’ with two different agendas. The “ majority members” in their session read and indorsed a petition to have House Speaker, Alex Tyler recuse himself as head of that body. of the House of representatives calling itself" majority members" have signed a resolution in a separate session to have house speaker, Alex Tyler recuse himself as House Speaker. The resolution which was read by Lasanah Sannoie, one of Rep.Acarous Moses Gray close confidants was signed by forty members of the House of Representative in the joint chambers. According to the resolution Numeme T.H Bartekwa, Emmanuel Nuquay, Samuel Kogar, Thomas Fallah, Acarous Gray, Edwin M. Snowe, Julius Berrian, Morais T. Waylee, Samuel G. Woleh,Rechmon S. Anderson, Corpu G. Barclay, Adolph A. Lawrence, Christian Chea, Johnson Chea, Saah Joseph, Roland O. Cooper. Others who signed are Worlea S. Dunah, Henry B. Fahnbulleh, Edward S. Forh, Josephine George Francis, Stephen S. Kafi, Jr., Jefferson S. Kanmoh, Edward Karfia, Mary Karwor, Jeremiah Koung, Eugene F. Kparkar, Gertrude T. Lamin, Jeremiah W. McCauley, Prince K. Moye, George S. Mulbah, Tokpah J. Mulbah, Robertson N. Siaway,Sr., Gabriel B. Smith, Rechard M. Tingban , Ricks Toweh, Bill Twehway, Ballah G. Zayzay, J. Byron Brown and the Deputy House Speaker, Hans Barchue making the number 40 as those who have signed to ensure that the Bomi County Lawmaker(Tyler) recuses himself as Speaker until his name is cleared from the Global Witness corruption Report. Giving reasons for their action, the “Majority members” said House Speaker Tyler indictment has caused him to lose the legitimacy and popular consent to preside over them. Among reasons they said the criminal indictment hovering over the Speaker has brought the entire House of Representatives to public disrepute and undermines the office of the Speaker as the presiding officer and the 3rd person in succession to the presidency of Liberia. They accused House Speaker of denigrating his colleagues who expressed disagreement with what they called dictatorial leadership and referred to them as surrogates something they said has brought split among them as the people direct representatives. According to the petition, until the embattle House Speaker clears his name from the corruption charges hovering over him, Deputy House Speaker, Barchue will serve as presiding officer of the 53rd House of Representatives. But a member of the Tyler bloc few minutes after the anti-Tyler bloc reached their decision convened a press conference describing his colleague’s action as illegal and unconstitutional. James Biney said the issue they are calling on the Speaker to recuse himself is a matter that is before the court. He said the expression “recuse himself” as used in the anti -Tyler bloc resolution speaks to voluntary action indicating that “one recuses himself or herself in specific instance because of possible conflict of interest or lack of impartiality”. In Rep. Biney’s augment, he said speaking of morality an indicted person cannot be considered immoral on grounds that he or she is indicted. “Indictment is a formal accusation which must be proven in a court of competent jurisdiction. Until such happens, one under our jurisprudence is presumed innocent” Biney said. He went on to say that if the precedence of getting the leader of a one brance removed on a basis of indictment and not court verdict but thought tricks, the tendency of the executive controlling legislature will be enhanced at the time when it should be broken adding that “ this is not good for any emerging democracy”. The Tyler bloc lawmaker said on the issue of fighting corruption, President Ellen Johnson Sirleaf should go after those who made National Oil Company of Liberia (NOCAL) to go broke, those who squandered the Japanese Aid to Liberia, those who mismanaged Chevron Social Development Support to Liberia. He said “ the contrary would suggest to the public and the world that the fight against corruption is not only selective but a sham”.