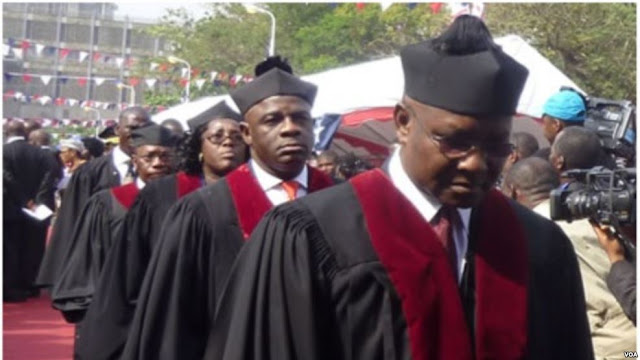 The Liberian Supreme Court will hear Monday from the feuding sides of the country’s House of Representatives. About 40 of the 73 members of the House want Speaker Alex Tyler to recuse himself while he faces criminal bribery charges.
A grand jury indicted Tyler, other government officials, a Liberian businessman and a foreign mining company in May following a report by London-based advocacy group Global Witness.
“We are cognizant that the accused is presumed innocent until proven guilty. So, we are not asking him to be removed but we want him to recuse himself until he’s vindicated," Representative Edwin Snowe, a former speaker of the house and vocal Tyler opponent told VOA.
"We are not looking for a speaker who after sitting on a defendant’s bench and after his case comes back to preside over the House of Representatives,” Snowe said.
The Global Witness report says more than $950,000 in bribes and other suspicious payments were made to top Liberian officials by the Britain-based Sable Mining Company and its Liberian lawyer, Varney Sherman to secure a mining concession in 2010.
The report alleges Tyler received $75,000 in consulting fees. He has accused President Ellen Johnson Sirleaf of being behind the effort to unseat him.
Tyler has asked the Supreme Court to issue a writ of prohibition against those trying to conduct House business without his authority.
President Sirleaf wrote a letter to legislators last week in favor of Tyler recusing himself. The president has since withdrawn the letter, citing clerical errors.
The dispute over Tyler has halted legislative proceedings, including the passing of a national budget.
Tetee Gebro in Monrovia contributed to this report.
Source: Voice of America