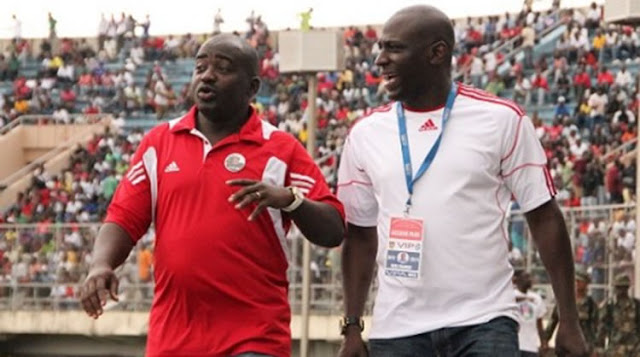 The President of the Liberia Football Association Musa Bility was this week elected Chairman of the Group of National Football Associations in Anglophone Africa.
The Presidents of some eighteen NFAs from across the English-speaking countries on the continent, which were in the Nigerian Capital Abuja to meet the visiting new FIFA President Gianni Infantino on his first official trip to Africa, elected Bility to the newly created position.
Musa Bility in the new position as Chair of the group of NFAs is expected to co-ordinate the affairs of the various national football associations in their dealings with the Zurich-based FIFA head office. These include programs of football development in various parts which is key to the national associations including funding and stadium development.
FIFA President Gianni Infantino who arrived in Abuja with the new Secretary General Fatma Samoura - the first ever woman to hold that position, met the Presidents of the National Football Associations who had assembled in Abuja.
Speaking to the press after the meeting Infantino said his vision is to transform football in Africa.
He said he had promised during his race for FIFA President that his first priority is reforms and the second one is to invest more in football development in Africa. He said already there has been an increase in the development fund by four times for each member association which is a significant increase.
The FIFA President who was received by the Nigerian President, Muhammadu buhari, said already he has fulfilled one of his pledges with the presence on the FIFA delegation of Madam Fatma Samoura, the new Secretary-General who hails from Africa.
Speaking further he said, he had discussed with the leaders of the African Football Association the expansion of the number of countries to participate in the finals of the world cup with two additional slots for African countries from five to seven among the 40 teams for the 2026 World Cup.
“The fact that 18 Presidents of national associations are here in Abuja to discuss with us on football development shows that there is a big belief within the football community that we are on the right track,’’ he said.