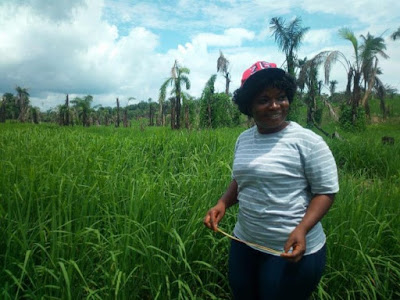 By Marcus Malayea in Gbarnga City, Bong County
Women account for eighty-five percent of the agricultural labor force of Liberia, playing an important role in the management of food production.
Despite the critical position and contribution of women in agriculture, women are often discriminated against, preventing them from acquiring ownership, access to and control of land.
In Liberia, agriculture constitutes a significant fragment of the country’s economy. More than two-thirds of Liberia’s population are involved in subsistence agriculture, using very rudimentary but outdated technology.
A Liberian female Agriculturist, Zobo Luther, in an interview with the Daily Observer on her farm on Tuesday, August 14, in Jorquelleh District, in Bong County, said with her passion for agriculture, she is working to close the gender gap in agriculture in Liberia.
Zobo Luther, armed with a Master’s degree in Agronomy and Plant Breeding from the Kwame Nkrumah University of Science and Technology in Ghana, said she purchased for herself 75 acres of land upon completion of her studies in 2015 and she has so far cultivated 15 acres with a variety of different cash crops.
She told this newspaper that she has planted coconuts, beans, rice, eddoes, plantains, cassava and other cash crops on the farm.
“I intend to cultivate the entire land with different cash crops including perennial crops like oil palm or cocoa,” she disclosed.
“Women make up much of the farming workforce, but they have not comprehended their economic influence alongside their male counterparts” Miss Luther emphasized. “When women have equal access to on-farm assets like land, labor, extension, and credit for other inputs, this can increase agricultural yields, which in turn leads to increased income,” Luther explained.
“But being a young woman in a sector perceived as male-dominated has its challenges,” Luther admits.
She told this reporter that the argument among men is that increasing women’s access, control and ownership of land will lead to stronger bargaining power and higher income and would also serve to strengthen women’s “voice” within households and communities.
Madam Luther maintained that access to market remains a challenge for most smallholder farmers in Liberia. Poor and impassable roads, lack of storage facilities and lack of market links between farmers and buyers are among factors hampering farmers’ efforts.
Meanwhile, Madam Luther is appealing to the Government of Liberia (GOL), through the Ministry of Agriculture (MoA), to provide local farmers with farming implements and loans that would enable them to produce more food, noting that any country that does not feed its citizens is far from developing.
“My dream is to supply the country with vegetables in the coming years,” she concluded.﻿