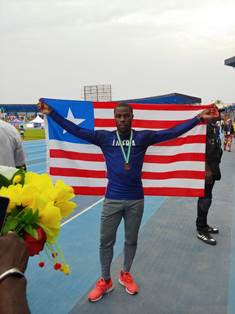 Kadmiel Enders reaches final at 1.90m high jump
Team Liberia has grabbed a bronze medal in 110 meters hurdle at the African Senior Athletics Championship held at the Stephen Keshi Stadium in Asaba, Delta State from Wednesday–Sunday (August 1–5).
Mulbah Zaza, president of Liberia Athletics Federation (LAF), said the team was among the participating countries that escaped the chaos of being 100 miles away from the venue in Asaba, and stranded at the Murtala Muhammad International Airport in Lagos,
“Thanks to a better preparation of going for the competition earlier because we did not face connecting flights and visa issues,” Mulbah said.
“We appreciate the moral concern of the Ministry of Youths and Sports, but again, we did not receive anything from the government to represent the country in the competition where the Liberian flag was hoisted while singing the country’s National Anthem,” he said.
U.S. based Liberian hurdler, Wellington Zaza, on behalf of the four-man Team Liberia, on Saturday ran the bronze medal 110 meters race at 13.88 seconds.
Liberia’s only medal at the African Senior Athletics Championship summed up the total bronze medals to four in the past years.
Akeem Sirleaf, another U.S. based 200 meters Liberian sprinter, left in the heat with 21.38 seconds.
Liberia’s  female high jumper Otricia Borkuah did not clear (or successfully) a jump, but Kadmiel Enders reached the final but stopped at 1.90 meters in male high jump.
About 51 countries with over 800 athletes were in Asaba.
It may be recalled that Team Liberia, comprising four athletes, arrived in Asaba, Delta State, Nigeria on Monday, July 30.
LAF vice president for technical affairs, Frederick Krah, said Team Liberia will return home today, August 6, from the 21st African Senior Athletics Championship.
During opening program on Wednesday, Nigerian President Muhammadu Buhari urged the athletes to imbibe the spirit of sportsmanship and eschew any vice that can cause disunity among the participants.﻿