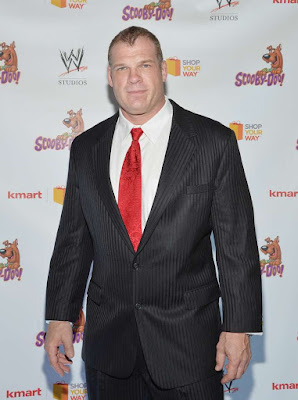 
From Wrestlemania to the mayor’s house.
Glenn Jacobs, better known by his WWE name “Kane,” was elected the mayor of Knox County, Tennessee Thursday, beating Democratic contender Linda Haney.
The 51-year-old former wrestler, who was listed at 7’0” and 323 pounds at his peak as the Big Red Machine, considers himself a “Reagan Republican.” He listed seven goals on his campaign website: a commitment to keeping taxes low, a renewed focus on quality of education, continuing to attract new jobs to the area, improvement of roads and infrastructure, “full and absolute transparency,” safer communities and “a fresh outlook on limited government.”
Jacobs won his primary by just 23 votes.
"Since May, we've been knocking on doors, continuing that,” he told WATE. "We've also continued the process of meeting with department heads, school board, county commissioners, that kind of thing."
Jacobs and his wife, Crystal, moved to Tennessee in 1995, where he opened Jacobs Insurance Associates.
Over his 25-year wrestling career, Kane racked up 18 titles, including three-time world champion and 12-time world tag team champion.
He’ll take office on Sept. 1.﻿